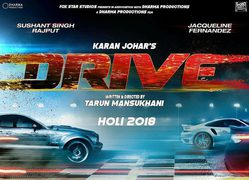 Directed by Tarun Mansukhani and produced by Karan Johar and Dharma Productions, 'Drive' is set to be the first installment of a new action series and will star Sushant Singh Rajput, Jaqueline Fernandez, Vikramjeet Virk and Sapna Pabbi. The film marks not only the first time that Sushant and Jacqueline have appeared on screen together, but also Tarun Mansukhani's return to the director seat after a break of almost 10 years. Mansukhani's first, and only other production was 'Dostana' back in 2008. Karan Johar has confirmed that 'Drive' will not be a Bollywood remake of the 2011 Hollywood production of the same name. The official synopsis for the film draws attention to a stunt driver who by night, becomes a getaway driver. The protagonist becomes entangled into the dark underworld of his city when he falls for his neighbour's wife. Hide full plot... Show full plot