Celebrating Female Film Editors from Past to Present

Nobody can deny any longer that Hollywood is a sexist and patriarchal industry dominated by men. In addition to the wage gap, which continues to make shocking headlines, and the shockingly low number of women who are given a creative space to tell their own stories, the #MeToo movement forces us to confront the serious, deep-rooted problems of systematic abuse that permeate the industry. Although Hollywood is slowly waking up to the need for change, as is the rest of society, the debate over sexism in cinema continues to be dominated by the experiences of famous actresses with a big platform, and women in less glamorous corners of the industry remain unheard.

The presence of women behind the scenes in the film industry sadly remains to be nothing more than a whisper, with men dominating an average of 80% of the roles. According to a report from The Celluloid Ceiling, in 2018 only 8% of the top 250 films featured a female director, only had 16% a female writer, 26% a female producer and 21% a female editor. These figures show little to no improvement from 2017 and, as is made clear from the diagram below, this alarming inequality has barely changed in the past twenty years. 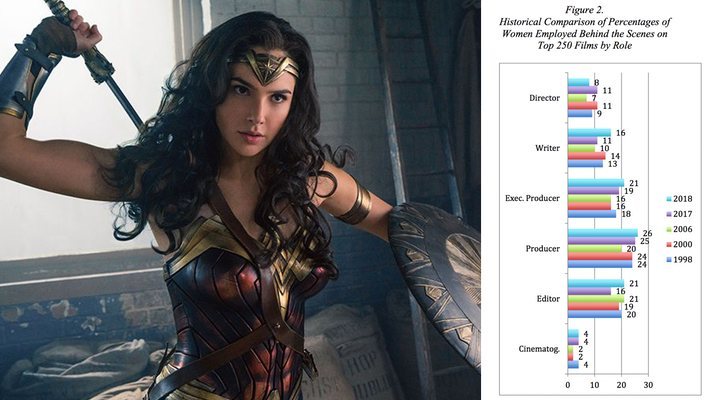 It is strange to think that Hollywood was not always so hostile towards female talent; in the silent age of film, when cinema was taking its first steps as a global industry, women were thriving as directors, writers, and creators with the same passion as their male counterparts. In fact, during the first years of cinematography the film editing was a field almost entirely dominated by women. At first the task of editing a film was seen as nothing more than simple labour and the montaging of clips was likened to the delicate manual labour of sewing. The creative side of film editing was overlooked at the time, but in 1926 the Los Angeles Times published an article praising the work done by these women: "one of the most important positions in the motion-picture industry [was] held almost entirely by women" whose job it was to assemble "thousands of feet of film so that it tells an interesting story in the most straightforward manner". How did we then go from thriving at the head of an industry, to almost entirely disappearing from it? The answer lies in two determining factors which contributed to men taking over the editing chairs: the arrival of sound cinema and the new studio system.

First of all, sound technology was considered an electrical, scientific field, better suited to the male sex, so women were deemed less employable. Furthermore, with the new studio system of chain production, directors were constantly working on different projects, moving from one shoot to another without time to edit. With this freedom, the women in charge of editing the films could be increasingly creative with their task; cinematic style thus took on a new dimension and once editing began to play such a significant role, men began to look for careers in the field and women were left out. In an interview with FilmSound, the cinema legend, Anne V. Coates, expressed this point, saying: "While it was just a background job, they let the women do it. But when people realised how interesting and creative editing could be, then the men elbowed the women out of the way and kind of took over". 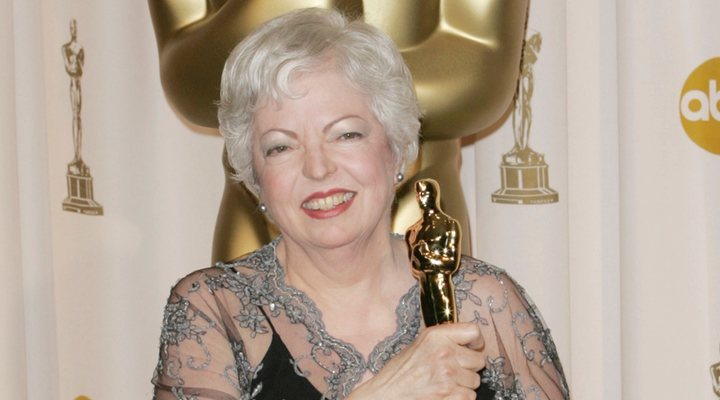 Film editing gained increasingly more respect and in 1934 the Academy created the new category in the Oscars for Best Editing. By 1940 the Los Angeles Times had already declared "lady film cutters a vanishing profession"; as the profession gained more and more status, positions were given to men and female filmmakers found it harder to work their ways up to the role of editor. Although women ended up counting for around a fifth of film editors, in the 85 years of the Oscar Awards Shows in which the category of Best Editing has been in play, only ten awards have gone to the hands of women:  Margaret Sixel, Gabriella Cristiani, Claire Simpson, Lisa Fruchtman, Marcia Lucas, Verna Fields, Anne V. Coates, and Thelma Schoonmaker (who has won three).

Match Made in Heaven

There is an old saying that we have all heard a thousand times before: "behind every great man is a great woman". This condescending cliché recognises the fact that the work of so many women has been in the shadows, women whose rightful place in history has been robbed from them: the female authors who had to write under pseudonyms, the Margaret Keanes, the scientists who have been denied a Nobel Prize, and of course the female editor who sit just behind the big Hollywood directors. Without a doubt, the erasure of film editors' work is not a problem which effects exclusively women and, despite their crucial task, there are very few well known names in the profession. Although editors rarely get the credited they deserve, practically since the birth of the cinema industry there has been a curiously intimate relationship between director and editor.

Perhaps one of the most popular director/editor pairs is that of Sally Menke and Quentin Tarantino. Until her sudden death, Menke edited every single one of the director's films, from 'Reservoir Dogs' to 'Inglourious Basterds'. With regards to the long term relationship he maintained with his faithful collaborator, Tarantino explained: "I write alone, but when it comes to editing, I write with Sally". He respected and appreciated her work to such an extent, that during the filming of 'Inglourious Basterds' he famously had all of the actors and actresses say a "Hi, Sally" between takes, in order to surprise her in the editing room.

Similarly, Alma Reville, also known as Lady Hitchcock, was not only the wife of the great master of suspense; she became his biggest ally and helped him with script writing, continuity, dubbing, and (of course) editing his films. "Her last word about the editing was the last word about the editing," Patrick McGilligan said in the biography of Alfred Hitchcock. Other pairings which rarely strayed apart are the likes of Thelma Schoonmaker and Martin Scorsese (who made almost 20 films together), Cecil B. DeMille and Anne Bauchens, or Alisa Lepselter and Woody Allen. Lepselter, in fact, dedicated her entire career to Allen's films, editing a total of 19, including the entire series of 'Crisis in Six Scenes'. In addition, J.J. Abrams has trusted the edition of all his films Mary Jo Market and Maryann Brandon, to whom we owe 'The Force Awakens' and 'Star Wars: Episode IX', and many more.

The Women of History

When considering the origins of cinema, we must pay recognition to Alice Guy, who became the first woman ever to create a film and the first person to use film as a fictional art form. Unlike popular belief, it was Guy, and not Georges Melies, who directed the first narrative film, titled 'La Fée aux Choux'. This was the first video of over a minute to include visual effects and editing; we owe her the entire concept of cinema and editing which we have today. Furthermore, As well as being a pioneer filmmaker, Guy was also ahead of her time in terms of social views, making a short film in 1906, 'The Consequences of Feminism', which criticised gender roles.

If we owe the concept of fiction to Alice Guy, then to Margaret Booth, another pioneer filmmaker, we owe the entire language of audiovisual communication. Booth was one of the first people to utilise fast cutting in order to build a sense of drama and her innovative style impressed Irving Thalberg, the head of production at Metro Goldwyn Mayer, to such an extent that he coined the term "Film Editor" to describe her talent, replacing the previous term "cutter". Around the same time, during the peak of studio systems, Barbara McLean rose to significance as one of the most powerful women within 20th Century-Fox. As the right-hand-woman to Darryl F. Zanuck, the boss of Fox trusted her to such an extent that he consulted her opinion in every decision he made, from casting to costumes. McLean made her own space in a world of men, was nominated four times for an Oscar, and edited the first film in CinemaScope, 'The Robe' (1953). 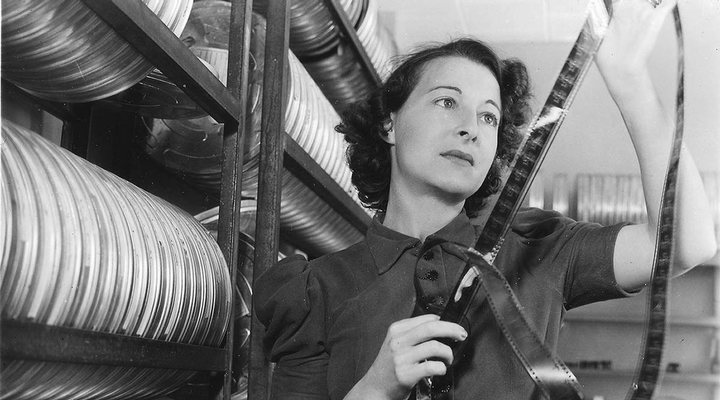 As time went by Hollywood became an increasingly hostile place for women who wanted to make a career in the industry. However, this did not stop Dede Allen, who began her own career in the 1960s, doing simple production tasks, and ended up becoming one of the most important film editors in history. She developed her own innovative style which used sound as a new narrative resource by making dramatic cuts regardless of continuity. Many producers were angered by her artistry and her ideas were so provocative that she was almost fired from 'Bonnie and Clyde'. The lead actor, Warren Beatty, had to personally pay her salary in order to fight for her to continue working on the film. Special recognition must also be given to Dorothy Spencer, an editor who managed the impossible feat of bringing 'Cleopatra' to the big screen in 1963. With more than 320 minutes of footage, Spencer edited the film to cut the running time to under 4 hours.

The Women of Today

Sally Menke described the profession of editing as "the silent heroes of film", but for the sake of this article we celebrate the silent heroines. The industry wanted to remove them from editing rooms, history has forgotten them, but in celebration of International Women's Day, it is time to celebrate these women who have been driving forces in the seventh art form. Make careful note, because all of these women are responsible for the best scenes in your favourite films, and you didn't even know it:

- Eda Warren: 'Back from Eternity', 'I Married a Witch', 'The Young Savages'

- Lisa Lassek: 'Bad Times at the El Royale', 'The Avengers', 'Cabin in the Woods' 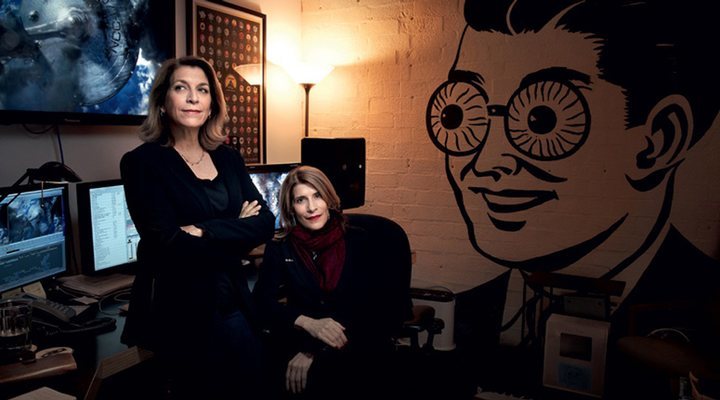