Olivia Colman is the latest gem to adorn the Crown Jewels of Great British cinema. Outshining the presumed front-runner, Glenn Close, last night Colman was awarded with the Oscar for Best Actress thanks to her unbelievable performance as Queen Anne in 'The Favourite'. The actress has already won a Golden Globe and BAFTA for her role in Yorgos Lanthimos' film, but that did not make then win any less of a humbling shock. 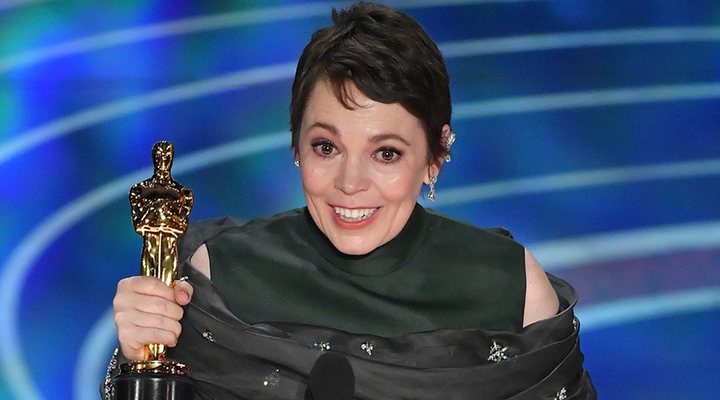 "It's genuinely quite stressful!", Colman exclaimed as she was handed her first ever Oscar award. Through tears of joy and nervous laughter, the actress humbly thanked Lanthimos and her two co-stars, Emma Stone and Rachel Weisz, describing them as "the two loveliest women to fall in love with and to go to work with every day". Colman also remembered the women with whom she was nominated in the category, singling out Glenn Close in particular to say, "you have been my idol for so long [...] I think you're amazing and I love you!".

Her speech made for one of the most heartfelt and endearing of the evening, and the actress was nearly brought to tears mentioning her parents and her children. Her win streamed in the early hours of Monday morning in the UK, thus Colman addressed a message to them saying, "if you're not [watching the show], then, well done! But I sort of hope that you are, because this won't happen again". Finally she turned to her husband, Ed Sinclair, saying, "I love you so much. 25 years you've been my supporter", while he gazed on with tears in his eyes. "He's going to cry... I'm not!" Colman laughed, holding back tears of her own.

Colman's sincere and humble speech had half the audience sobbing, particularly co-star and previous Oscar-winner, Emma Stone, who was crying with pride from the moment Colman ascended the stage through to the end.

The other actresses nominated alongside Colman were Glenn Close ('The Wife'), Yalitza Aparicio ('Roma'), Melissa McCarthy ('Can You Ever Forgive Me?'), and Lady Gaga ('A Star is Born'). As well as specifically mentioning her idolisation of Close, Colman declared her love for all the women and ended her speech by blowing a kiss to Lady Gaga and McCarthy, crying out Gaga's name in admiration, who had won the award for Best Original Song with 'Shallow'. After an extensive career of twenty years, the endearing actress undeniably deserved this recognition of her commitment to the industry.