Sam Mendes: "'1917' is not about a specifically British experience. It's about the human experience of war"

Is it possible to immerse a 21st century viewer in the depths of the First World War? This is the objective that acclaimed filmmaker Sam Mendes set out to achieve with his latest feature, '1917', which arrives in UK cinemas this week. A technical powerhouse that has already taken the Golden Globes by storm, '1917' is also a favourite at the upcoming Academy Awards. 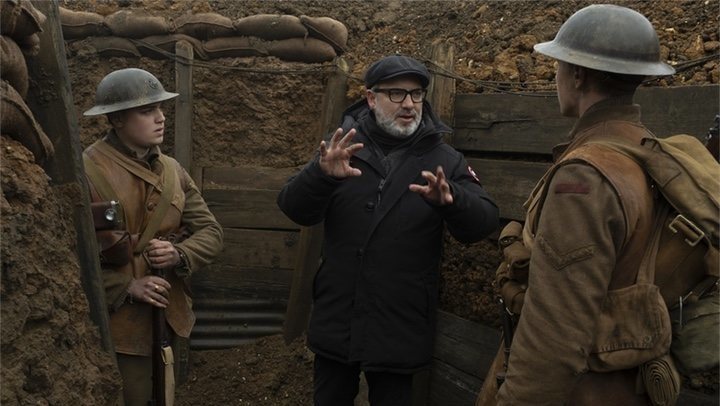 If there is any one aspect of filmmaking that characterises this British director, it's his ability to take to a new project and know exactly what story needs to be told. Mendes burst onto the cinema scene in style with his debut feature 'American Beauty', a masterpiece that has defined cinema for a generation of film lovers. He then went on to try his hand at film noir with 'Road to Perdition', marital drama with the heartrending 'Revolutionary Road', and even took on a legendary saga when he directed the James Bond hits 'Skyfall' and 'Spectre'. The first of these two instalments, a breath of fresh air regarding the iconic character currently played by Daniel Craig, showcased Mendes's excellent partnership with the award-winning director of photography, Roger Deakins. It is '1917', however, that pushes the collaborative capabilities of this duo even further.

This inimitable partnership was one of the many things we discussed with Mendes when we had the opportunity to sit down with the director. Mendes delves into the film's origin as a story recounted to him by his grandfather (who himself fought in the First World War), explains his decision to shoot the film in a single sequence shot, and sheds light on the tremendous difficulties that come with such a complex filming process. In the interview below, Mendes even shares the unique and innovative techniques employed by the crew during shooting.

A Trench Full of Stars

'1917' stars a duo of young actors, George MacKay ('Pride') and Dean-Charles Chapman (the easily-influenced Tommen of 'Game of Thrones'). Although it is these two performers that carry the audience through the film, many notable British actors take to the screen in brief yet crucial roles, including Colin Firth, Andrew Scott, Mark Strong, Benedict Cumberbatch and Richard Madden. When asked if he'd ever feared that such recognisable faces would shock the viewer out of such an immersive experience, Mendes maintains that "I needed authority and status and power in those scenes", something which this cream of the British acting crop can certainly offer."I needed the audience to feel like these ordinary men's lives were intersecting with lives that were bigger than theirs", explains Mendes. In that, the director certainly achieves the goals he set for himself with his latest filmmaking venture: '1917' is a film that is larger than life. In cinemas from the 10th January.