'Sonic the Hedgehog': The redesigned hedgehog premieres in new trailer

According to the studio's initial plans, the world's fastest hedgehog should have been ready to race onto the big screen this coming December. However, when Paramount released the first trailer for 'Sonic the Hedgehog', the video went viral as a result of the outaged reactions it drew from fans. The design of the legendary Sega character had nobody convinced, and so the studio decided to change the graphics in the face of the onslaught of complaints. Finally, to the relief of fans, we have our first glimpse of the redesign of Sonic in the new trailer from Paramount.

In the new trailer, fans will be happy to note that several changes have been made from the original. The main complaints that arose after the first trailer were from fans who took issue with the design of Sonic's legs, the proportions of the eyes being far too small and the decision of the animation crew to include hyperrealistic teeth. Now, the blue hedgehog appears with a design much more similar to that of the iconic video games instead of the studio's initial "realistic" approach. The most obvious change is the eyes, which in this trailer are far wider and more similar to those of the original character, thus giving Sonic a more traditionally "animated" feel. The teeth have also noticeably reduced in size. In addition to the trailer, Paramount has also released a new poster for the film, where the new and improved Sonic appears alongside Jim Carrey, who will star as the villain of the family-friendly flick.

Over the past few months, there have been several leaks about the updated design of Sonic, with many fans reacting positively to the rumoured changes. It remains to be seen exactly how the hedgehog's most dedicated followers will react to the redesign and whether the studio's choice to alter the original animation will convince them this time around. A few months ago, Tim Miller, one of the film's producers, stepped forward with the statement that he was personally convinced that the public would respond positively to the changes made.

Jim Carrey, who plays Dr. Robotnik in the film, also commented on the changes made to the film and on the influence of the fans in bringing them about: "I don't know quite how I feel about the audience being in on the creation of it while it's happening. So we'll have to see what that entails, because sometimes you find that the collective consciousness decides it wants something, and then when it gets it, it goes, 'Okay. I just wanted it. I didn't care about it'". 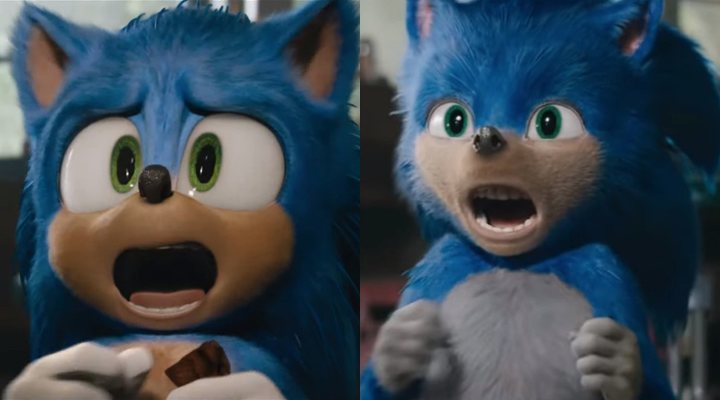 After a year full of controversy and changes, the film, directed by Jeff Fowler, is finally set to hit cinemas on the 14th February 2020. The film will depict the famous blue hedgehog teaming up with Tom, the sheriff of a small city, in an attempt to stop the villanous Dr. Robotnik from capturing Sonic and using his powers to take over the world. Ben Schwartz will lend his voice to the character of Sonic the Hedgehog, James Marsden will take on the role of Tom Wachowski and, as mentioned already, Jim Carrey will step up as the film's luxuriously moustached villain.