'Star Wars: The Rise of Skywalker': All of the clues in the exciting final trailer

The launch of the final trailer for 'Star Wars: The Rise of Skywalker' has caused social media to jump to hyperspeed, with several platforms flooding comments and reactions from fans, many of whom are starting to theorise about what surprises the finale of the Skywalker saga will bring. Whilst the sensational trailer caused a few headaches, it was also full of references and emotions for fans to pick up on and enjoy. 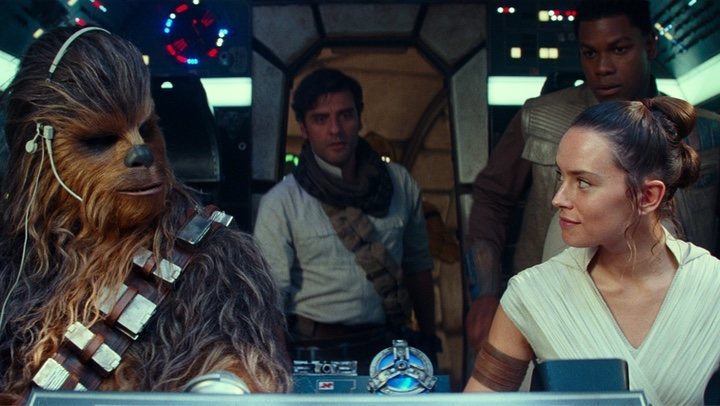 The saga's conclusion is directed by J.J. Abrams who, after passing his directorial responsibilities to Rian Johnson for 'Star Wars: The Last Jedi', is taking the reins once more in this adventure. We'll be seeing some unfamiliar faces in the galaxy alongside returning cast members Daisy Ridley, Adam Driver, Oscar Isaac and John Boyega, with Dominic Monaghan and Keri Russell joining the cast.

The trailer and matching poster 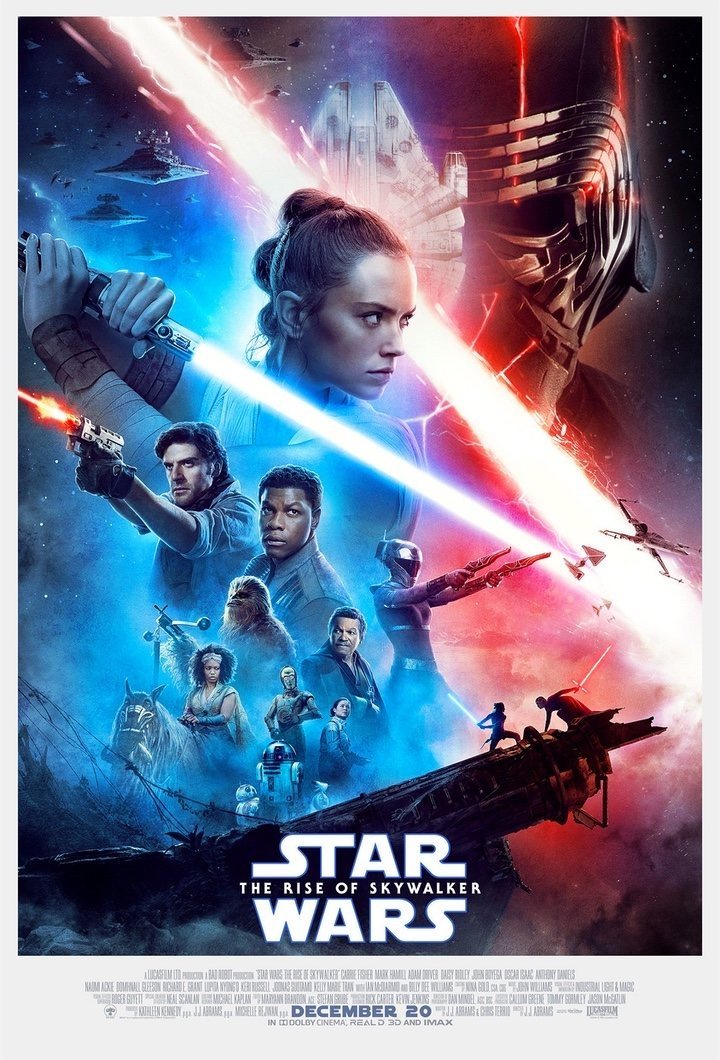 It's not only the trailer that the internet has gone mad for, but also this fantastic new poster. Several references to the film that also pop up in the trailer can be spotted in this poster, such as the Orbaks, a species of creature similar to horses.

The two-minute trailer gives us another glimpse of Rey, as close as ever to her friends and allies Finn and Poe, but also to Kylo Ren, who wishes to explore the link he shares with her, though fans are still in the dark about his true motives. We've compiled all of the clues that appear in the trailer as well as all of the theories that this brief insight into the galaxy far, far away has prompted.

1We smell an Ewok 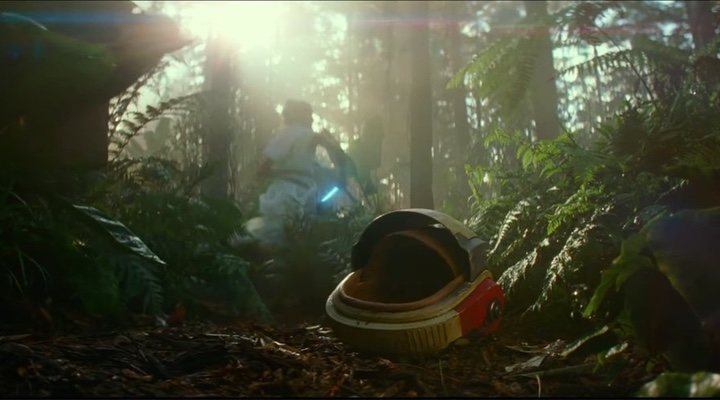 The trailer begins with a shot of a forest that inevitably calls to mind the moon of Endor, the planet on which the debris of the Death Star was found in 'The Return of the Jedi'. We dismissed the possibility of this planet being Dagopah, another location known for its woody landscapes (and for being the place where Yoda trained Luke), because several shots of the trailer show Rey delving into the ruins of the Death Star itself. Furthermore, 'Star Wars: The Rise of Skywalker' is the third and final instalment of this new saga, and we already know that J.J. Abrams enjoys making references to the original trilogy.

However, there's no reason to rule out the possibility that Abrams could be introducing a new planet, just like he did with Jakku in 'Star Wars: The Force Awakens', with everyone thinking that the desert landscape belonged to Tatooine. Whether it's a new planet or not, and regardless of whether the occasional Ewok pops out, we're excited by this opening.

2 Going back to the very beginning

It appears to be on this very same planet that we see Poe, Finn and Chewbacca fire up a spaceship that seemed familiar to the biggest fans of the franchise. There is speculation that the ship could be the Tantive IV, the first spaceship shown on the screen in the cinematic release of 'Star Wars: A New Hope' in 1977.

Leia Organa was the guest of honour on this ship which was briefly home to the plans that held the secret to the destruction of the Death Star. The Tantive IV also shows up at the end of 'Rogue One' and in 'Star Wars: The Return of the Jedi'. Could it make its third appearance in the next installment?

3 "People keep telling me that they know me. Nobody does" 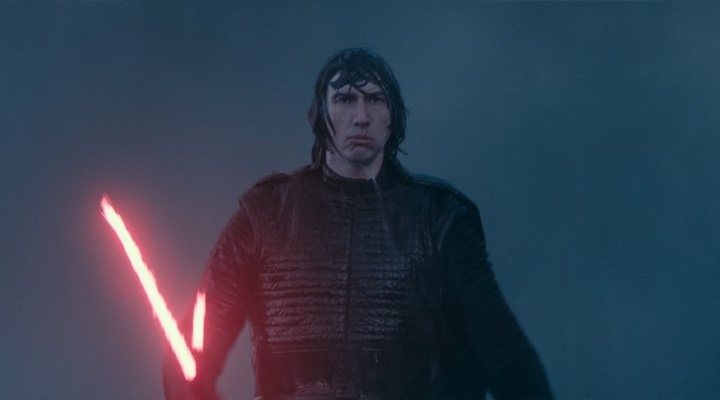 Rey's voiceover in this scene, possibly set amongst the remains of the Death Star, refers to the personal journey that our protagonist has been on over the previous installments. In 'The Last Jedi', Kylo Ren confirmed that the parents of this aspiring Jedi were nobodies that abandoned their daughter, leaving her all alone in the world.

We still don't know if this is true or whether it was some malicious plan of Kylo's to designed to break Rey's spirit. However, the second installment constantly referred to the bond that exists between the two characters. This connection is perhaps the impetus behind Kylo's reply in this scene, for when Rey says "People keep telling me that they know me. Nobody does", Kylo responds "I do".

The push and pull between both characters is the narrative thread that unites the entire trilogy and, as we can see in the trailer, the two are just as likely to fight one another in an epic battle as they are to form a team. Will the third instalment reveal whether Rey truly matters to Kylo, or whether his claim that she does was just another one of his tricks? Although the fact that he cast off his mask in 'The Last Jedi' suggested that Kylo Ren was ready to leave behind his links with Darth Vader, this new adventure paradoxically shows him repairing his helmet. Kylo's future is still a complete mystery.

4 A makeover for the Sith 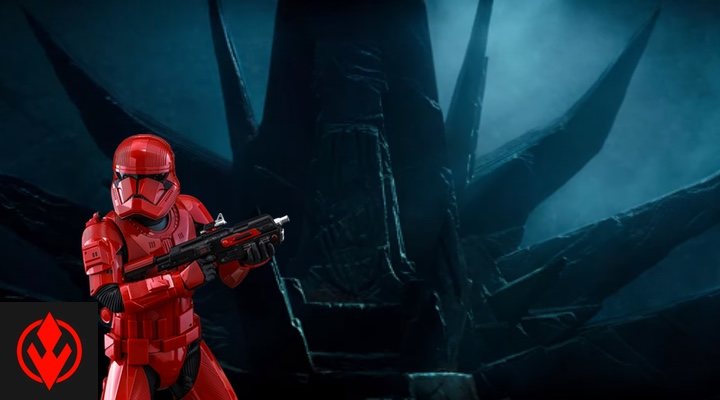 It's through the new red uniforms of the imperial soldiers, the Sith troopers, that we catch our first glimpse of a new symbol representing the Sith, the core of all evil in the saga. Although the reason behind this change in design is still unknown, there's a moment in the trailer during which the symbol makes a subtle appearance.

In the scene, the voice of Palpatine says "long have I waited" whilst in the shot we see an empty stone throne on which there is an engraving reminiscent of the new Sith symbol. As of yet, we don't know whether Ian McDiarmid will make a physical appearance as Palpatine, or whether he'll be a spirit or even merely a free-floating voice, but this snapshot from the trailer does suggest that a bond exists between the Emperor and the symbol of the Sith. 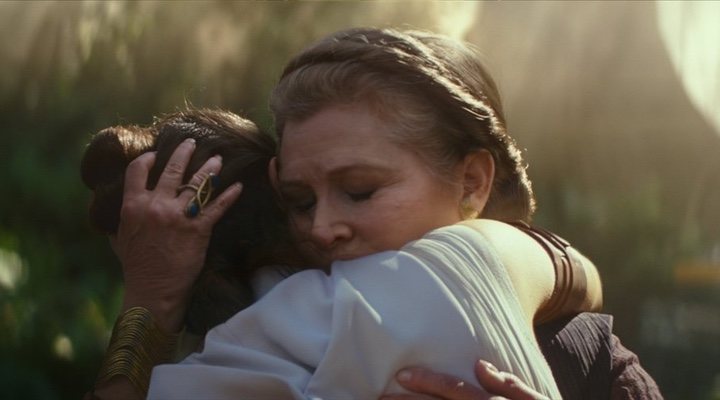 It's no coincidence that the trailer was released in the early hours of the morning on the 21st October. This date holds special significance because it is the day that Carrie Fisher would have celebrated her 63rd birthday. Her death still saddens fans deeply, and so this film seizes the opportunity to say a final tearstained goodbye.

The trailer shows the emotional embrace shared by Rey and Leia again, this time accompanied by a voice over from Luke Skywalker (Mark Hamill). "Confronting fear is the destiny of the Jedi. Your destiny".

We already knew that Ian McDiarmid was set to reappear as Emperor Palpatine, but we didn't know how nor why, and although the trailer granted us a small insight into this imposing figure of the Dark Side, we still don't know what role he is there to play. The trailer also reveals a new detail about the mission entrusted to C3PO, which has us even more worried for him than we were before. Regardless, the battles, inside references, lightsabers and touching tribute to Leia that feature in this trailer have achieved their goal: to make us more eager than ever to return to this beloved saga, where we'll no doubt wish to stay forever.

'Star Wars: The Rise of Skywalker' will hit cinemas on the 20th December. Start counting down the days!