After eleven years, this chapter of the Marvel Cinematic Universe has finally been brought to an emotional end with the aptly titled 'Avengers: Endgame'. Throughout the twenty two films in the saga, there have been many unforgettable scenes, but some of the most famous iconic moments were not in fact originally part of the script. 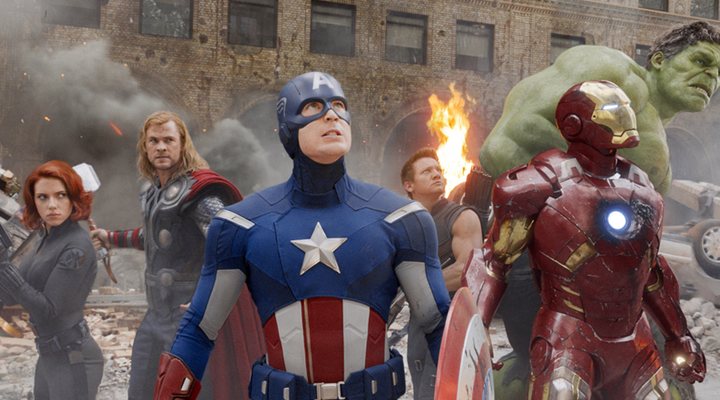 It takes a special group of people to bring a genre which once was dismissed as "nerdy" into the forefront of popular culture, and these actors did just that. As well as having to thank the hundreds of directors, screenwriters, producers, and special effects teams, each of the stars brought their own personality to their characters, making the franchise what it is today. And so much so, that many of the heroes' most memorable lines were improvised in the moment by the actors themselves.

Taika Waititi, director of 'Thor: Ragnarok', admitted that "probably 80%" of the dialogue in the film was pure improvisation, making way for some of the most hilarious scenes in the whole of the MCU. However, while Waititi's film is known for its more liberal approach to the script, some more surprising lines in the MCU were also entirely unscripted. In this article we go through the top most iconic ad-libbed moments in the MCU, which you probably did not realise were unscripted!

The Best Improvised Scenes in the MCU 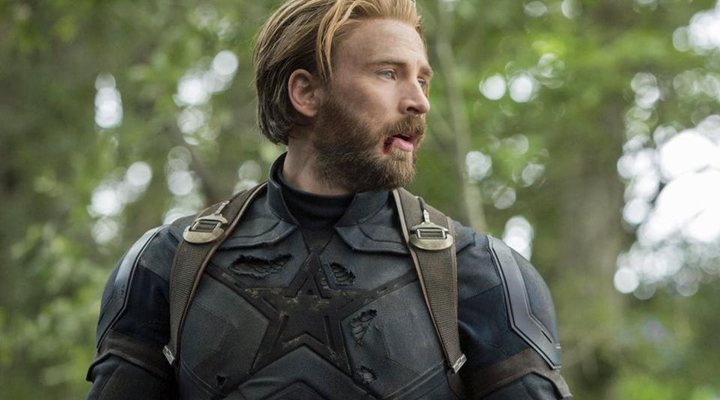 Chris Evans' sudden choice of facial hair in the third instalment of the 'Avengers' saga was a bit of a surprise for everyone. After having spent a few years apart, Thor and Steve Rogers reunite on the battlefield in Wakanda, and shortly after Thor makes his epic entrance, he and Rogers have a quick bro-to-bro catch-up regarding their beard choices.

It unfolds that this conversation was entirely improvised by the actors, who believed that their characters would want to catch up after their time apart, even mid battle. Rogers asks Thor if he got a haircut, to which Thor replies "I see you've copied my beard". 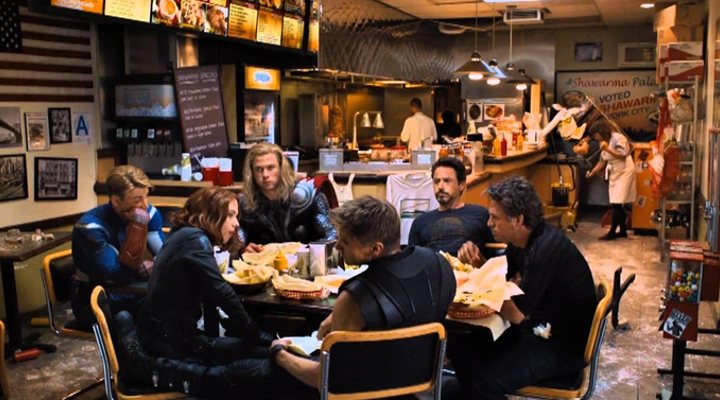 Although not exactly improvised, the famously bizarre post-credits scene at the end of the the first 'Avengers', in which the team was sat at a dilapidated restaurant eating shawarma, was added by director Joss Whedon as an afterthought. Whedon decided that Iron Man's half-conscious rambling about shawarma would be all the more funny if afterwards there was a scene in which the team were actually eating shawarma.

However, when he decided this, production for the film had already ended, so the director had to wait until the day of the international premiere, when he managed to round up the cast to shoot this end scene. 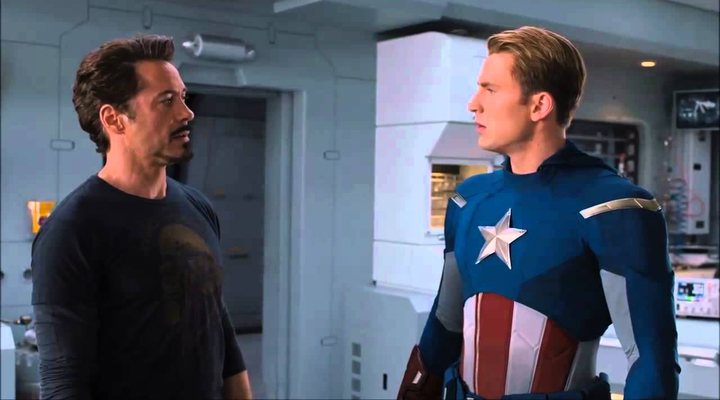 Part of Tony Stark's charm is the cocky charisma he shares with actor Robert Downey Jr. The actor developed a reputation on the set of 'Avengers: Assemble' for hiding snacks around set, much to the irritation of the crew. Downey, however, had no qualms about satisfying his hunger, even whilst shooting.

In one scene, while Rogers is arguing with Bruce Banner, Stark is munching on a snack, breaking the tension in the room by offering the pair a blueberry, much to the disapproval of the Captain. 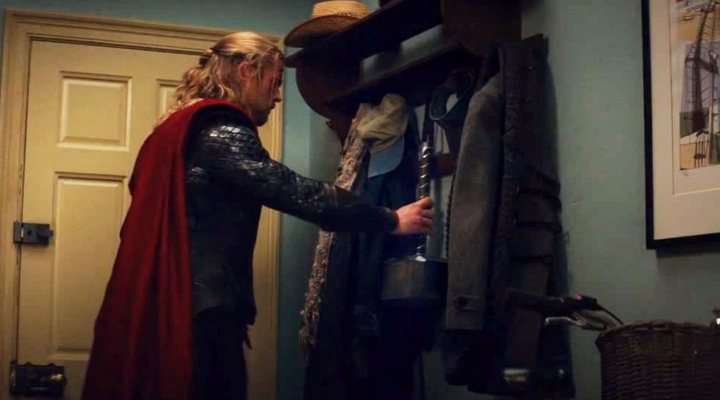 This 'Thor' film has been unfairly bashed by fans of the Marvel Universe. It may not have been quite as hilarious as its action comedy sequel, directed by Waititi, but it certainly had its moments. Chris Hemsworth brought his personal humour to the role and in one of the takes decided that it would be funny to hang his hammer on the coat rail as he enters the house, a move which the director decided to keep. 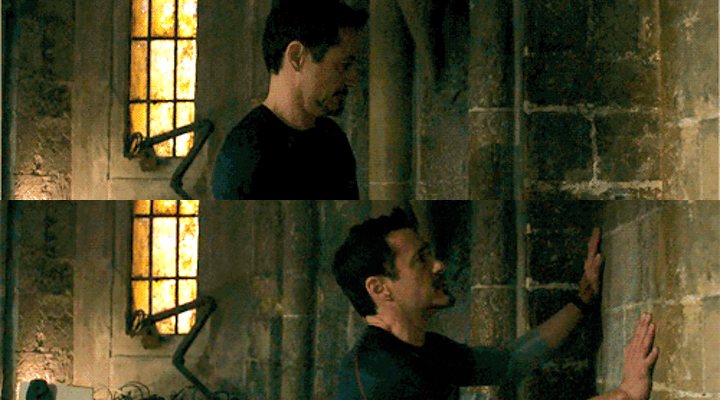 It is probably pretty clear by now that Robert Downey Jr., like Stark, has a habit of saying whatever comes to mind. Another of his golden improvised lines was in 'Age of Ultron' when, just before the secret door in the wall slides open, he says: "please let in be a secret door" and added the "yay" afterwards. 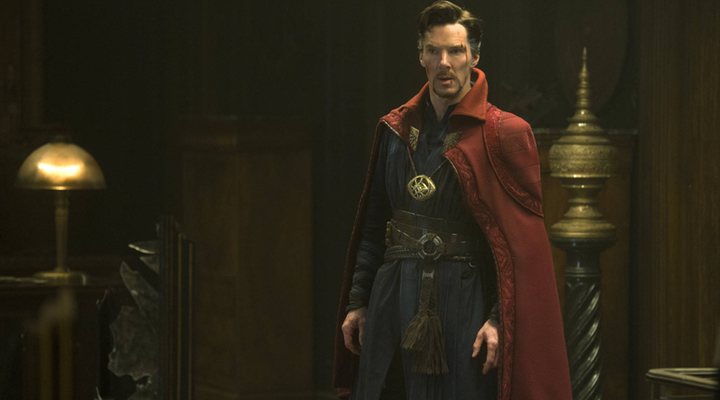 Originally in the 1960s comics, Wong's character was Doctor Strange's manservant and a bit of a racial stereotype. In order to bring the character into the 21st Century and update the problematic aspects, in the film Wong was the keeper of the ancient books and a mentor to Strange.

In one scene, Benedict Cumberbatch made a joke about Wong's name (known simply as "Wong"), calling him "Beyoncé", whom the character had never heard of. The directors liked this moment so much, that the next scene shows Wong listening to the artist, apparently as research. 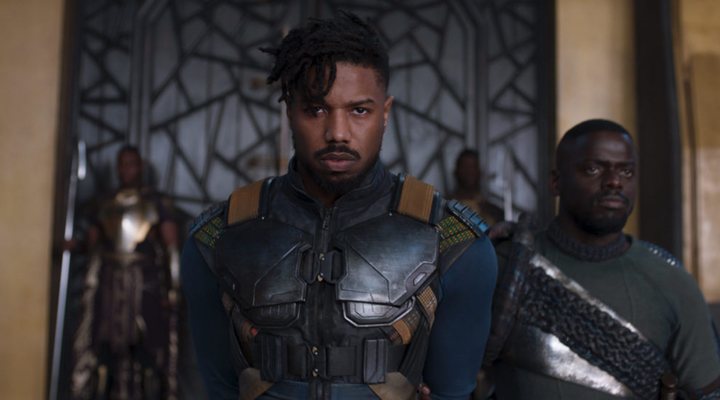 Michael B. Jordan's performance as the villain in this Oscar-winning Marvel film was undoubtedly one of the best parts of the feature. Jordan added his own flair to the already unforgettable character when, meeting Queen Mother Ramonda (Angela Bassett) for the first time, he cheekily remarks, "Hey, Auntie".

It was in an interview that Bassett admitted that this line was actually made up by her co-star on the spot. The line became so iconic that the internet exploded with memes and merchanice, branded with the slogan. 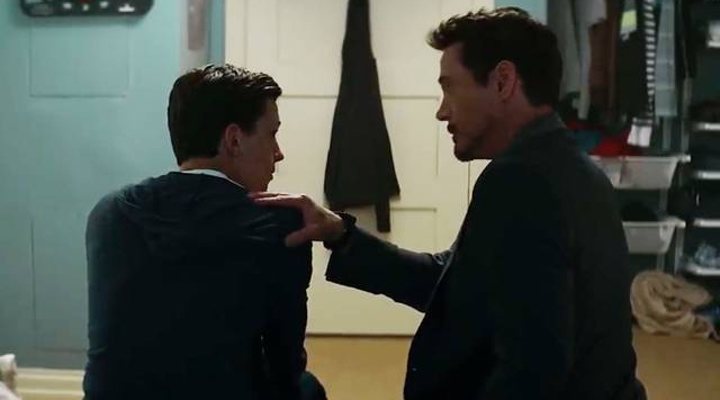 Not only is Tony Stark a guide and mentor to Peter Parker, the youngest of the Avengers, but Robert Downey Jr. too is happy to offer guidance to the young actor when he needs it. In one scene in 'Civil War', Tom Holland forgot his blocking, failing to move out of the way to allow Downey to sit next to him.

Instead of cutting the scene to re-shoot, Robert Downey Jr. stays in character and tells Parker "I'm gonna sit here, so you move the leg", subtly reminding the actor what to do in a fun and entertaining way. 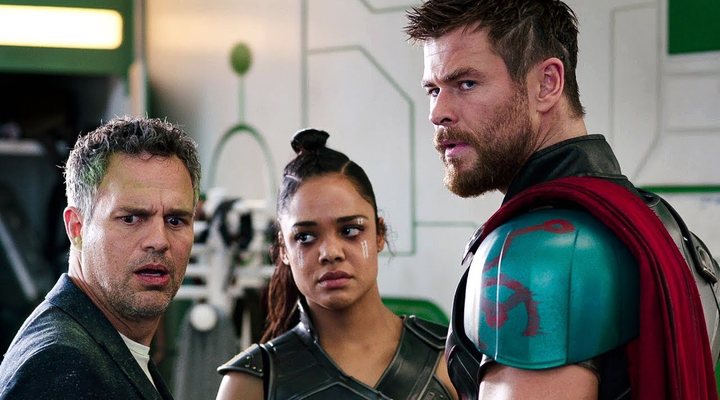 As Waititi has admitted, most of the dialogue was improvised in this film, and many of the funniest lines came from the mind of Chris Hemsworth. One of the funniest scenes is when Thor tells Valkyrie and Bruce a traumatic childhood story about Loki turning into a snake in order to scare him.

The scene was shot around six times, and in each take Hemsworth came up with a different story to tell about Loki's torments as children. In the version that stuck, the God of Mischief transforms himself into a snake, an animal which Thor apparently loves, only to disappoint his brother when it turned out to be Loki in disguise. 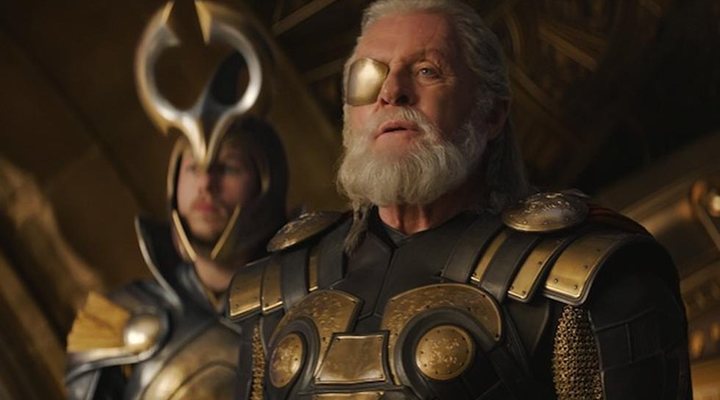 Unlike 'Ragnarok', the first instalment in Thor's story was almost entirely scripted, bar one or two spur-of-the-moment lines. One such moment was during Odin's angry speech, banishing Thor to Earth for his behaviour.

Loki tries to interrupt his father while he is talking, and the King of Asgard lets out an unearthly growl. Tom Hiddleston's understably surprised reaction was genuine. 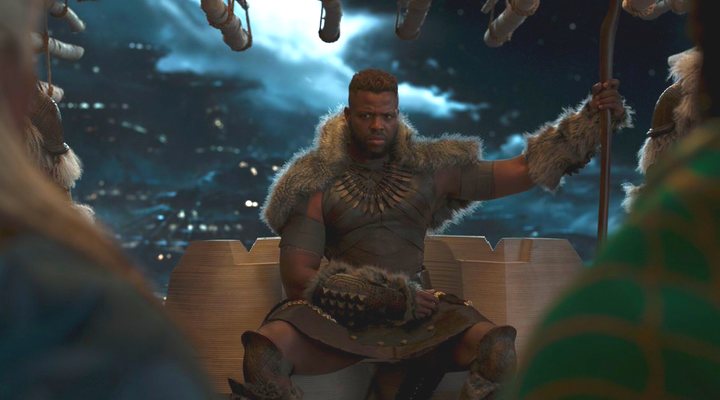 It was not only the King of Asgard who improvised inhuman growls to put unruly subjects in their place; in 'Black Panther', the king M'Baku makes a similar noise of discontent when Martin Freeman's character attempts to interrupt him. 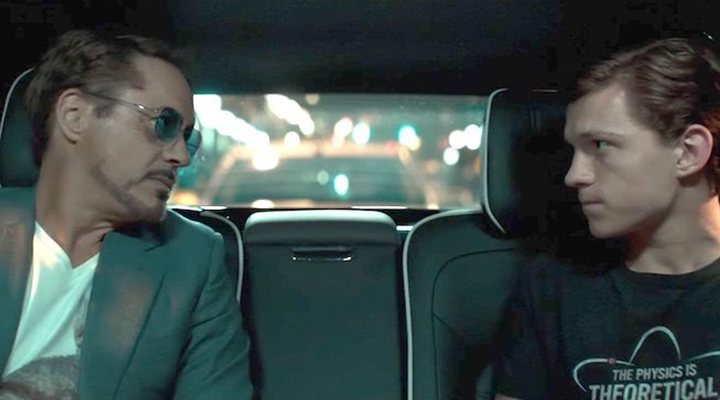 This adorably awkward moment in Holland's first solo film as the superhero was also not part of the original script. Parker and Stark are sat in the back of a car when Stark reaches across the teenager to open the door for the him. In the moment Holland thought it would be funny to hug the other character.

Staying in character, Holland acts surprised to have Iron Man leaning over him, but willingly embraces him, saying, "Oh. Okay... Alright." Robert Downey Jr. plays along, responding: "It's not a hug. I'm just grabbing the door for you. We're not there yet". 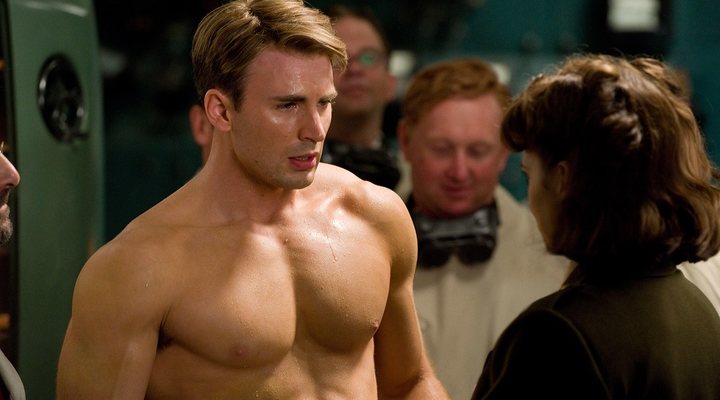 In Captain America's debut film, when he reveals his transformed self for the first time in Dr. Abraham Erskine's laboratory, Hayley Atwell was so (understandably) in awe of the actor's impressive pecs that in the very first take she instinctively touched his shirtless chest.

Speaking about the scene in an interview with Esquire, Atwell admitted: "When Chris Evans first took his shirt off on the set of Captain America, I just instinctively grabbed his man boob. They kept it in the film. So we did a couple of takes of me being really inappropriate with my hand on his pec for the duration of the scene". 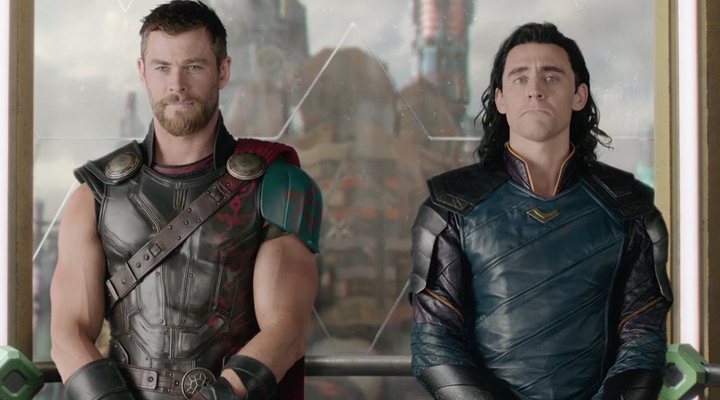 Waititi left the majority of the scenes unscripted because he wanted to actors to bring their own sense of humour to the film and characters, which certainly paid off. Some of the funniest scenes in the film were the brainchild of Thor himself, including the famous "Get Help" stunt.

When Thor and Loki are attempting to escape from the planet Sakaar, the brothers decide to pull an apparently old trick of theirs named "Get Help", in which Loki pretends to be injured while his brother begs the armed guards for help. Thor then quite literally hurls Loki at the unsuspecting soldiers, disarming them in one. This escape plan was Hemsworth's idea and the two actors improvised the dialogue completely. 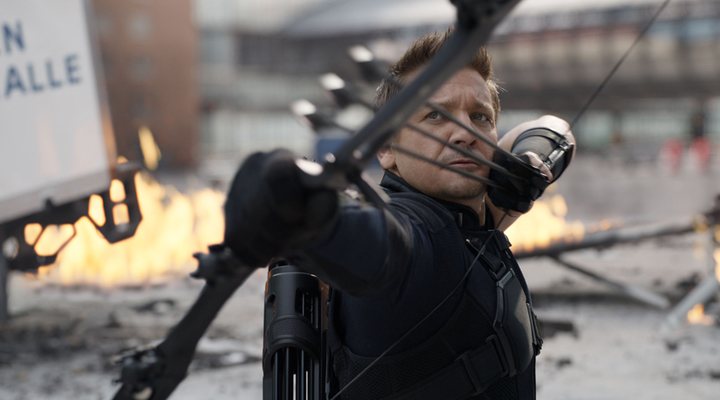 Hawkeye was always the most underappreciated Avenger in the comics, but thanks to Jeremy Renner, he has become an integral member of the onscreen superhero team.

One of the character's most famous lines was improvised by the actor in 'Age of Ultron'. Hawkeye and Quicksilver has a love-hate relationship throughout the film, and in one moment the speedy superhero runs past Hawkeye, calling back, "keep up, old man!" Renner mocks aiming at him, muttering, "Nobody would know. Nobody". 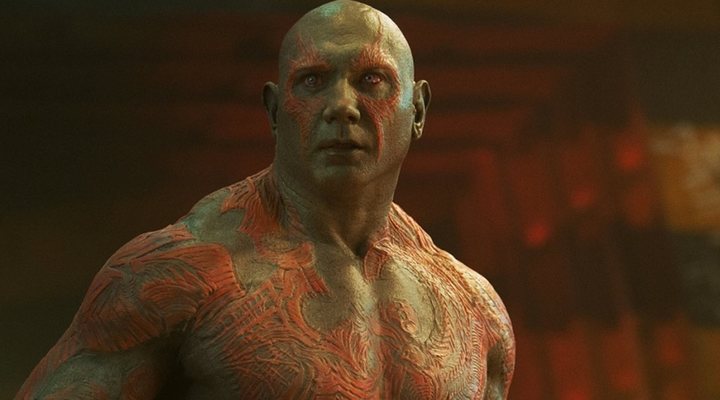 It is pretty impressive that in such a bleak film there were still so many moments of humour throughout. Many of these comic scenes were thanks to the 'Guardians of the Galaxy' characters, perhaps thanks to the talking racoon and tree. 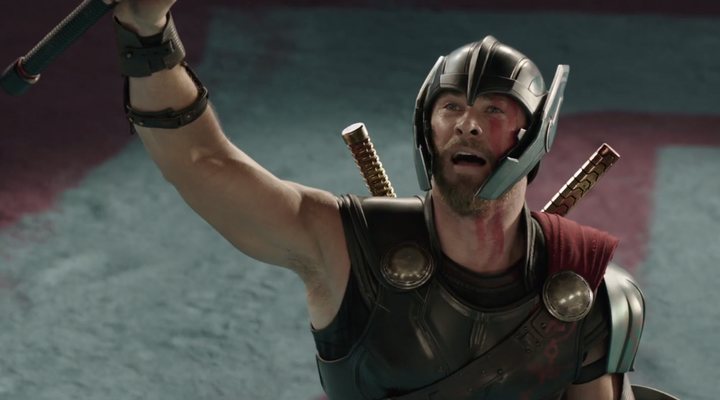 The fight between Thor and Hulk was every Marvel nerd's fantasy come true. Not only was the fight itself epic, but it also ended up being one of the funniest sequences in the film. On the day when the scene was shot, a child from the Make-A-Wish foundation was visiting the set and made a hilarious suggestion which ended up staying in the film.

The line "he's a friend from work" was the ingenious idea of the child, and was loved to much by everyone on set that they used it and decided to keep it in the final cut. (Perhaps this is the most heart-warming of all the improvised moments!) 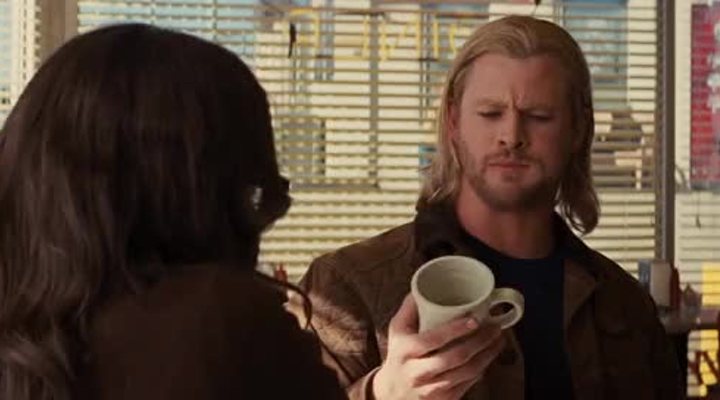 What could possibly be the hero's most iconic line in the entire saga was not in the script and was ad-libbed by Hemsworth in the first 'Thor' film. When the clueless hero first comes to Earth, he is sat in a café with Darcy and Jane, and unaware of social norms or acceptable behavior.

The Asgardian prince smashes his mug on the floor to show his appreciation for the coffee, shouting "This drink, I like it! Another!" His co-stars' shocked flinches are all genuine. 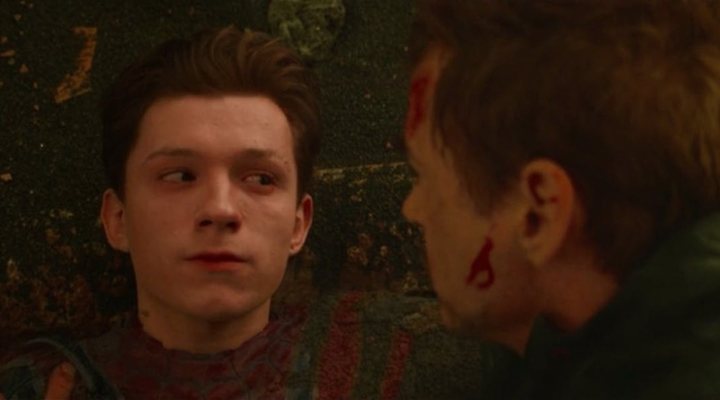 The ending of this film could have melted even the coldest of hearts. Watching our favourite heroes fading into dust while their friends stood helplessly and watched was a tear-jerking moment for everyone in the audience, but perhaps the most heart-wrenching of all was the emotional goodbye between Tony and Peter.

Joe Russo asked Holland to improvise the lines as he was fading away and act scared of leaving, so those exiting words were made up in the moment: "Mr. Stark? I don't feel so good... I don't wanna go". 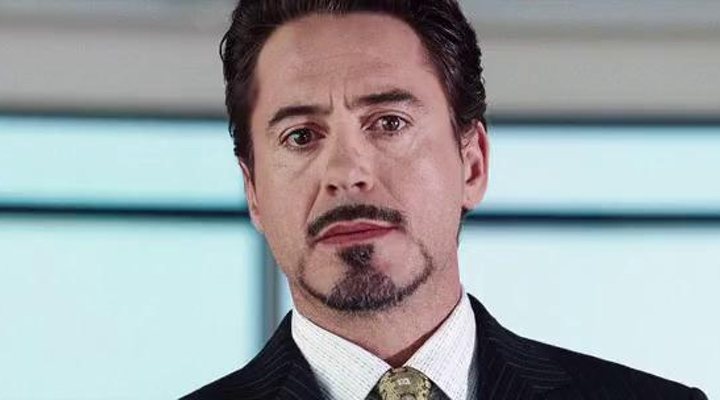 Now for the most iconic line of the entire Marvel franchise, coined entirely by Mr. Downey Jr. in the very first MCU film in 2008. The character's entire identity revolves around these lines, which are even echoed in 'Endgame' as a reminder of the hero's iconic origin story.

At the end of 'Iron Man', Downey deviated from the script, declaring simply: "I am Iron Man".

Which of these improvised moments is your all-time favourite? Were there any which surprised you?