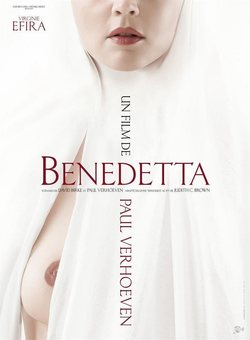 Directed by Paul Verhoeven ('Basic instinct', 'Elle') and inspired by the writing of Judith C. Brown, 'Immodest Acts: The Life of a Lesbian Nun in Renaissance Italy (Studies in the History of Sexuality)'. Set in the 17th century and inspired by real events, it tells the life of the nun Benedetta Carlini, abbess at the Convent of the Mother of God in Pescia, Italy, and how she began to have strange visions that led her to seclude herself . It is when the Catholic hierarchy decides to investigate and will soon find that the abbess Benedetta is having sexual relations with another nun of the convent, Sister Bartolomea. This will provoke a great confrontation with the Church, in a very complicated moment of history, in which Protestantism advances with force. Starring Virginie Efira ('The Sense of Wonder', 'In Bed with Victoria', 'An Impossible Love', 'Sibyl') and in which Daphne Patakia, Charlotte Rampling, Lamber Wilson, Hervé Pierre, Clotilde Courau, Olivier Rabourdin and Louis Chevillotte also participate. A controversial film that aspires to be the most controversial title of the year 2020, when telling a story with a strong sexual load, starring two lesbian women and in which religion plays a fundamental role. Initially scheduled for release at the Cannes Film Festival in 2019