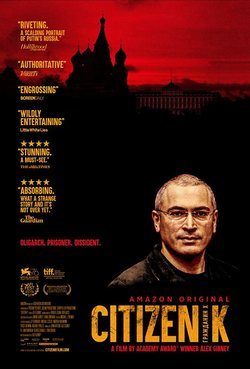 In 1990, Mikhail Khodorvovsky was one of the wealthiest men in Rusia. After the fall of the Soviet government in that same decade, this entrepreneur took advantage of the economic instability. He sought to make gains from the privatization of various goods and was responsable of the creation of the first commercial bank in Russia. He also founded one of the biggest oil companies, Yudo. His economic power gave him such political influence that he dared to openly criticize Vladimir Putin's government. A few months after these comments, Mikhail Khodorvovsky was arrested and the Russian government accused him of fraud and froze his shares. After being sentenced to nine years of incarceration in 2003 and then facing new charges in 2010, Khodorvovsky has lived behind bars for more than a decade. In these time, this millionaire began a discredit campaign against Vladimir Putin and the corruption of his government from within the jail cell they'd thrown him in. 'Citizien K' is a portrait of the Putin's Russia through the eyes of Mikhail Khodorvovsky. Alex Gibney ('The Inventor: Out for Blood in Silicon Valley') directs, writes and produces this documentary around the strange case of this enigmatic character. This documentary has been nominated to Jury Award for Best Documentary Feature in the Philadelphia Film Festival. Hide full plot... Show full plot