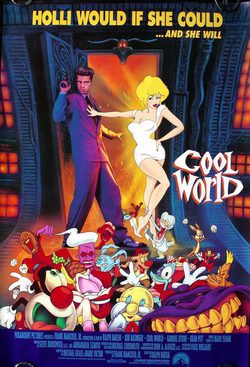 In 1945 Las Vegas, World War II veteran Frank Harris is transported to an animated realm named the "Cool World", a hellish, twisted city of surreal landscapes and random cartoon violence, following a traffic collision with a drunk driver. Forty-seven years later, detained cartoonist Jack Deebs creates a comic strip named Cool World, which features the femme fatale Holli Would. Holli voices her desire to enter the real world, but is declined help from Frank, who is now a detective in the Cool World. After being released from prison, Jack is transported to the Cool World and is smuggled into a club by Holli. Frank becomes aware of Jack's presence in the Cool World and aggressively confronts him, informing him that Cool World has existed long before Jack created the comic series and warns him that "noids", humans from the real world, are not allowed to have sex with "doodles", the inhabitants of the Cool World. Holli brings Jack back into the Cool World and the two have sex, causing Holli to transform into a human.

?
Write your own 'Cool World' review.