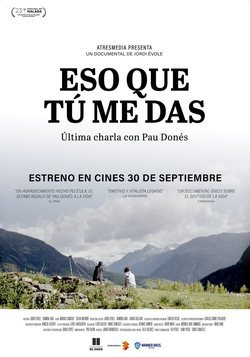 'Eso que tú me das' is a production of Atresmedia and Producciones del Barrio distributed in Spain by Warner Bros. Pictures. The documentary will hit theaters after its successful stint at the Malaga Film Festival, where it was well received by the media. In the singer Pau Donés de Jarabe de Palo, who fought for 5 years against cancer, clinging to the present, he lived until his last days wanting to communicate to others and share his joy of living, so fifteen days before he died he wanted have his last talk with Jordi Évole and thus leave his testimony and gratitude for everything he had received. He died on June 9 at the age of 53 years old. The documentary is a hymn to life and a lesson that the singer left us before he left, and part of the proceeds will go to research in the fight against cancer. The video for 'Eso que tú me das' was the last that the singer recorded. The video was recorded three weeks before, just at the end of the album Swallow or spit, on the roof of Donés's apartment in Barcelona, ??where he spent a good part of the quarantine due to the coronavirus. The vocalist of Jarabe de Palo left in that song his legacy of gratitude for the public but also for his daughter Sara, whose name he had tattooed on her phalanges.

?
Write your own 'Eso que tú me das' review.