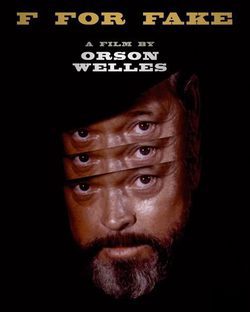 How to describe a film so unlike any other ever made? In a nutshell... ? F for Fake opens with a couple of magic tricks, segues as though by sleight-of-hand into the story of master art-forger Elmyr de Hory and his relationship with biographer Clifford Irving (a sequence "remixed" by Welles with extant footage from François Reichenbach?s documentary work-in-progress, Elmyr), then hones in on Irving when word gets out that his purported biography of recluse-mogul Howard Hughes is a first-class hoax in its own right. Here the film erupts in all directions, as Welles contrasts the sprawl of ?70s Hollywood with the halcyon Tinseltown that produced Citizen Kane; contemplates the continent that provided him with an artistic refuge some 800 years after the anonymous construction of the cathedral at Chartres; and, lastly, recounts a meeting between that most un-anonymous of artists ? Pablo Picasso ? and Welles? companion Oja Kodar, which took place in her youth, and during which...... ? The nutshell here clamps shut; the film itself, however, opens up onto infinite space.

?
Write your own 'F for Fake' review.