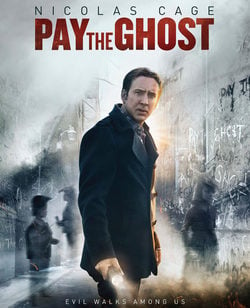 Starring Nicolas Cage and with a cast including Sarah Wayne Callies, Veronica Farres, Ñauren Beatty or the young Jack Fulton, this horror film directed by Uli Edel focuses on Halloween night and its terrible consequences for the character played by Cage. Mike Lawford is a teacher who discovers that his son Charlie has disappeared. The only fact known is that he disappeared during Halloween night. Since then Mike begins a relentless search to find his son. During his trip he will discover dark secrets that will make you think that the disappearance of Charlie it's not a coincidence. While searching for his son, he will discover that the supernatural is more real than it seems.

?
Write your own 'Pay the Ghost' review.

According to one of the extras, Nicolas Cage was so angry on a day of shooting that he kicked one of the pumpkins decorating the set.