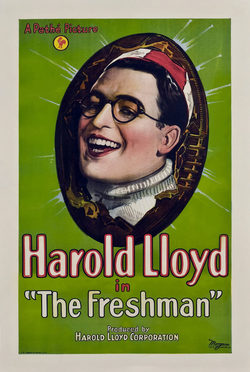 'The Freshman' is a comedy film released in 1925, belonging to the silent film and black and white. It is directed by Fred C. Newmeyer filmmakers, who directed more than 15 films, and Sam Taylor, director of almost twenty films during his career. The film is starring Harold Lloyd, a regular actor in comedy went on to appear in over 80 films last century. In this film plays Harold Lamb, a freshman student willing to do anything to be popular in college by joining the school football team. It stars Harold Lloyd, Jobyna Ralston, Brooks Benedict and James Anderson. It remains one of Lloyd's most successful and enduring films. In 1990 was selected for preservation in the United States National Film Registry by the Library of Congress.

?
Write your own 'The Freshman' review.