Omar Ayuso and Mina El Hammani ('Elite') discuss fictional explorations of the Muslim faith: "'Elite' is not a documentary"

Murder. Deceit. Betrayal. Sex. Mystery. Incredible fashion sense. These are just a few of the qualities that sent Spanish teen drama 'Elite' shooting to the heights of success when it launched on Netflix back in 2018. In preparation for the third season of parties and plot twists set to hit our screens on the 13th March, we sat down to talk to Las Encinas alumni Omar Ayuso (Omar) and Mina El Hammani (Nadia) as well as new addition Leïti Sène (Malick) about the future of Omander, their favourite memories from set and why exploring the Muslim community on screen does not mean that they're trying to offer an exact representation of it.

When asked about feedback received regarding the characters of Nadia and Omar, Mina El Hammani is quick to stress that any storyline represented in the show is pure fiction. "'Elite' isn't a documentary. It's a fictional story in which we can immerse ourselves and enter into a conversation with Nadia's family", explains the actress. "I always like to make that really clear because it's not a depiction as such of the Muslim community". El Hammani says that she doesn't think the issues of racism and xenophobia brought up are exclusive to one cultural group, stating that she has received messages from fans in Mexico that "have really identified with Nadia simply because she's a person who has a certain culture at home". What she likes to explore through Nadia's character, says El Hammani, is the question of "how do you deal with new situations that are presented to you and how do you experience them on a social level". Newcomer Leïti Sène makes a fascinating point about the overlap of race and culture in the series and how that is explored through the arrival of his character, Malick: "My character comes from a different part of society in that he has money and that changes things", says Sène. "When you have money, you have a different perspective of what the world means, about what you can and can't do". 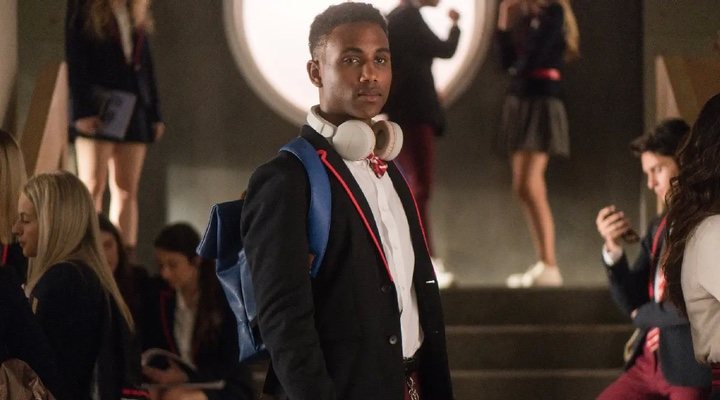 'Elite' may be pure fiction, but that hasn't stopped fans from being as immersed in the stories as if they were happening in real life. One particular source of obsession for 'Elite' superfans is Omander, the couple formed by Omar and the principal's son Ander (Arón Piper). Omar Ayuso warns fans not to grow complacent in their expectations of an immediate happy ending for the couple in season three. "It's not going to be easy", he says. "The obstacles in their life are still there and whether they can move past them or not, who knows?" As for the future of this beloved couple, Ayuso has some sage insight to offer: "Whatever the real future is for these characters, I would love it if in the end they become friends, they go to university together, they're flatmates...Because I also think that the love that you feel when you're 16...well, it depends, but fuck, life is long, you know? These characters still have a long way to go".

Would the cast be willing to explore these long lives that the characters have ahead of them in a spin-off? "Hopefully", says El Hammani. "There are thousands of seasons of 'Elite', thousands of stories, to tell with these characters, but course we know nothing yet".

After three immensely popular seasons, the cast and characters have grown beyond where they began when those three scholarship students first set foot in the glossy halls of Las Encinas, school for the rich, famous and corrupt. When asked what they would take away with them from the series, all three put special emphasis on the personal relationships formed between the cast and crew as well as the professional education starring in such a successful series has given them.

"I'd take away everything I've learnt and everything I've gotten to know, both in terms of what I've learnt on a personal and professional level...and the friends we've made", says Ayuso. "For me, it was learning with these people and getting to know Madrid", says Sène, for whom 'Elite' provided a huge learning curve in acting, as he had only been involved in one series prior to being cast in the role of Malick. "They gave me so much love and sympathy, and they extended their great relationship to me".

For Mina El Hammani, she's very aware of how valuable 'Elite' is to her professional career: "As an actress, you realise how lucky you are to be part of this profession and to be part of a project... on a platform like Netflix".

The third season of 'Elite' will return to Netflix on the 13th March with a batch of eight new episodes for your binge-watching pleasure.