Serinda Swan ('Coroner'): "I think everybody has suffered with mental illness in some capacity"

For a series that revolves around a woman that examines dead bodies for a living, Serinda Swan ('Inhumans') is anything but morbid and morose when it comes to discussing the humanity and vivacity that her character, Jenny Cooper, brings to the Canadian police thriller 'Coroner'. Set in Toronto, the series follows Jenny, a coroner that spends her days investigating suspicious deaths in an attempt to bring the perpetrators to justice. Despite having everything under control in the laboratory, however, behind closed doors Jenny is struggling with her mental health and familial drama that threaten to upset her carefully structured life. We had the exciting opportunity to interview Serinda Swan about the upcoming second season of 'Coroner', which is set to air on Universal TV on the 27th March. The actress speaks to us about the pressure to exceed the already high fan expectations, the importance of seeing more working women and single mothers have leading storylines on television, and how she gives live to the fictional world depicted in M.R. Hall's crime series on which the show is based.

'Coroner' adds up to create a recipe of all of the elements that go into making an exemplary thriller: a complicated lead, the interplay of crime and justice, and a generous helping of action and high emotional stakes. This winning combination led to the series being well-received in the UK and Canada alike, and so we asked Swan if she is nervous to meet and perhaps exceed the expectations of this pre-established fanbase. Swan explains that she is confident in the strong bond between the series and its fans: "It's a lovely relationship. I think it's because it's a very personal show; we deal with personal issues...The humanity is what we lead with. I think that's where our fanbase resides: in the humanity of it".

It's safe to say that many of these fans were also drawn to the series due to its associations with the series of books by M.R. Hall that serve as the inspiration behind this CBC drama. Adapting literature to the screen is a tricky business according to any bookworms out there that are desperate to see their favourite novels represented faithfully on screen, but Serinda Swan believes that it's important that the books and the show are able to sustain themselves as separate entities. "We talk about how they're sisters, not twins", says the actress. "They're from the same family, but they're slightly different stories...But that inner light that is Jenny is represented on both sides". 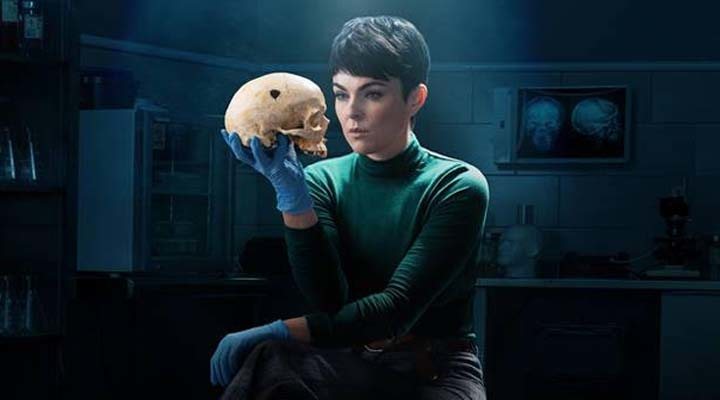 Speaking of the character of Jenny, Serinda Swan lights up as she discusses this treat of a character that is simultaneously a complicated woman, a single mother and a hard-working professional that rejects the idealisation of motherhood on screen. "I really wanted [my character] to drive home the piece of "I am a complex woman, and I am not the typical one that you see on television"". Another aspect of the character that Swan felt was extremely important to explore is Jenny's relationship with her mental health. Jenny suffers from panic attacks and repressed childhood trauma, something that required Swan to do plenty of research to be able to bring this experience to life on screen. "I think everybody has suffered with mental illness in some capacity...We have the ability to be able to understand what that is". After considering her own experiences with mental health, Swan spoke to other people that suffer from different mental illnesses to deepen her understanding of the sensitive topic. "Each season I go into, I study the next iteration of what that would look like for Jenny's body, mind and soul", says the actress, who explains that she consults books, blogs, vlogs and verbatim conversations to develop her understanding of mental health.

Not the story you expected

For Serinda Swan, whose other projects include innovative and interesting series such as 'Inhuman' and 'Smallville', with 'Coroner' she wanted to bring a fresh take on the characters and the stories to the screen. "Normally if you see a 17 or 18-year-old mother [on television], you know what that story is. This is not that story. Normally when you see a biracial gay teen...this is not that story either", says Swan, referring to her on-screen son, Ross (Ehren Kassam). 'Coroner' thus uses the classic police thriller formula but updates it for a 21st century audience. "All of these things take "abnormal" story points and put them together in a very normal, human story", concludes Swan.

The second season of 'The Coroner' will arrive via Universal TV on the 27th March.