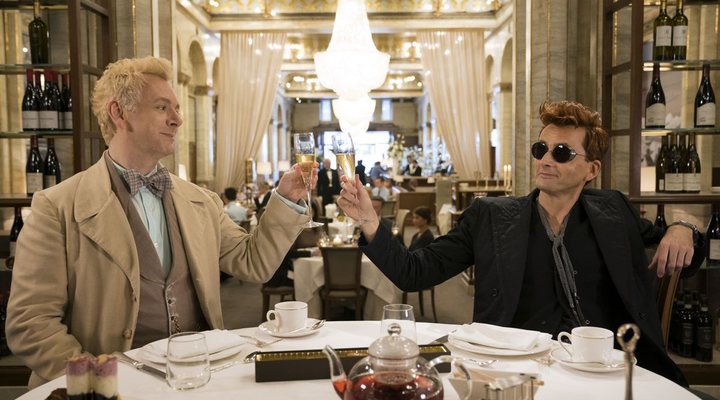 For those who have not had the luck of reading the novel, the story follows the unlikely friendship between the angel Aziraphale (Michael Sheen) and Crowley (David Tennant), a demon ; when the pair are forced to set their differences aside and work together in order to prevent Armageddon and the destructive wrath of an eleven-year-old Antichrist. We spoke to the two stars at a recent round table event in London, and they explained the pressure and process of bringing these celestial beings to life.

Embodying an Angel and a Demon

Before going to the initial read through, did the two of you discuss how you wanted to portray these characters?

David Tennant: It was something that we very much discovered. We both said this, that from reading the source material it felt very vivid. It felt like I knew who both these characters were and what they needed to feel like. But we didn't really unpick with each other [beforehand] how we might embody that. We read the scenes, and we read all the scripts in one day. And it did sort of develop over the course of that.

Tennant: I've found myself increasingly nervous of doing it otherwise. The more you come to a project thinking "I'm going to do it like this", the more inclined you are to fall on your face. Actually the best way is just to discover it through doing it.

How much did the costumes help you to embody these supernatural creatures?

Sheen: From the book and the scripts you get such a strong sense of who these characters are, and yet when you look for anything concrete in the book to refer to about them, there's very little. It's just a feel you get of the from the way they are together. So then as actors you have to start making concrete choices [...] And so the costume fitting is often the first time you have to make definite choices. So it can unlock all kinds of things, way beyond costume. Every time you make a choice like that, it somehow brings the character into slightly sharper focus. And that's not just in terms of its look but emotionally, psychologically, all that kind of stuff. So I find the costume fitting process hugely helpful. 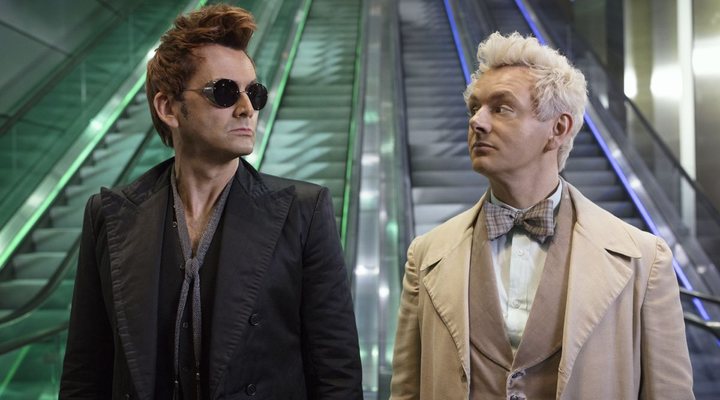 Did you have anyone in mind when creating the looks for your characters?

Tennant: Not specifically. We started with a much more clean cut look, because if there is any description, it's that he wore a three piece suit and had his hair slicked back. But that's a look born of the late 80s/90s, which is when the book came out, and he should be of now. So we had to slightly dispense of that, and go: "if you were doing that kind of yuppy, American psycho thing, then what's the 2019 equivalent?" And [I] always felt like he feels he's really cool. So what does someone who thinks they're really cool in 2018 look like? That was the focus that we went on.

Which time period look was your favourite?

Tennant: Oh yes, we travel through history. They were all fun to visit. I don't know how many of them I would have wanted to have done a whole shoot.

Sheen: Wearing armour is fun for a couple of hours, then after that it stops being fun very quickly. I loved doing the Shakespearean one, at the Globe. Because we were actually in the Globe Theatre so that was kind of fun, and in the Elizabethan costume.

Tennant: That was a great day that, wasn't it? I enjoyed the 60s look, I thought that suited Crowley, the sort of mop top and his very cool shades. What was great about that was always asking yourself the question: where would these characters be then? What version of [that time] suits them? How would they interpret that moment in time?

Sheen: And that's what's so satisfying reading that sequence as a reader, you just go: "oh this is great. What's the next one going to be like?" And then in the playing of it, hopefully it becomes very satisfying for the audience as well.

Tennant: Whereas Crowley would very much lean in to whatever moment in history he was in, Aziraphale would ever so slightly resist it. 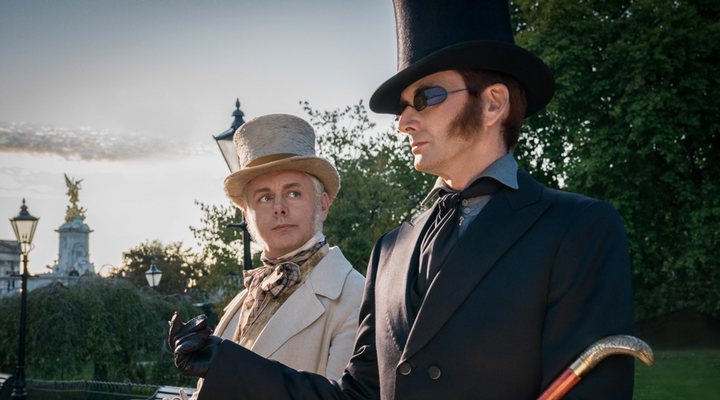 Sheen: Well I feel like Aziraphale has sort of rolled down the hill of history and things have just stuck to him as he's gone. So rather than manifesting his look, (which Crowley does, he's always of the moment) Aziraphale has just accumulated stuff over time. He likes that, he likes things that have age, and ultimately feel like an old favourite sofa: sort of a bit worn, and a bit over stuffed and comfortable. Whereas David got to have all these incredibly brilliant new looks all the time, I just slowly tried to add or keep [bits from history]. He's got that sort of waistcoat from the Dickensian period, he's got that sort of bow tie...

Sheen, you have been a long term fan of the book but Tennant, you never read it. How did you approach the roles together from different perspectives?

Tennant: I had no preconceptions. I learnt very much on the job how beloved this book was. I think it was the read through, where I sat next to Nina Sosanya (who I have known for many many years, who plays one of the nuns in the show, sister Loquacious). She was sat next to me, giddy with excitement to even be there at all. And she was saying, "I re-read this book every year of my life." And I thought, I've known Nina 20 year but this is a part of her [I never knew]...

Sheen: She's read in 20 times in the time you've known her.

Tennant: Exactly! This is something deeply personal to her, and that is something I've discovered more and more and more. People just wear [that book] by their heart and they adore it and they love it and it's so special to them. Which is wonderful, and then a little bit scary to think this is so precious and then I've become the caretaker of this corner of this novel. It's thrilling and slightly terrifying in equal measure.

Sheen: And for me it was sort of thrilling and terrifying in different ways, I suppose, because I read the book when it first came out and Neil work has been such an important part of my life. I was 18 when I read it first, I was in drama school here in London. So it's part of the inner tapestry that hangs in my mental hall. It's part of my life. It's informed all kinds of things because I've lived with it for thirty years. And so, for that reason, it is absolutely thrilling to be a part of bringing it to the screen, and absolutely terrifying for the same reason. It's not just a job. It's not just an adaptation. It's something that has been a sort of fundamental part of my interior life for years and years and years. So that brings its own terror. Let alone the people out there who also feel like that about it, who are going, "right, this had better be good." It does that for me as well.

Do you think can this project be read as contemporary political satire?

Sheen: Well of course it was written 30 years ago and Neil and Terry had to introduce a line into the book which was to say something along the lines of: it was ironic that it was the end of times when everyone was getting along so well. Which they were then. The Berlin Wall had come down, the world was a very different place at that point. So Neil talks about the idea that they felt kind of odd to be writing about the apocalypse when we were at the "end of history", as people were calling it at the time. The Cold War had come to an end and it seemed like we'd discovered the answer to everything. Now, 30 years on, with the TV adaptation, we're in a very different position. So it feels more prescient.

Tennant: [We are] neck deep in "history" now. Too much bloody history. I think any piece of great art, always finds its moment. It's like when you do a Shakespeare play, it suddenly feels utterly relevant to the moment you're in, whatever the moment is. I think anything that is relatable, will reflect aspects of your current experience. This right now is definitely doing that because the end times feel terrifyingly close.

Sheen: And the sense of absurdity and ridiculous that is part of the heart of the humour of this, seems to reflect [the current situation]. It's not just that things are scary. Things are ridiculous. And just bonkers and upside down. And that is very much part of the tone of this.

'Good Omens' is directed by Douglas Mackinnon and all six hour-length episodes will be available to Amazon Prime subscribers from 31st May.