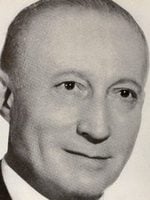 Paramount Pictures' founder, one of the five Hollywood's Majors. He began with penny arcades, offering moving peepshows that envolved into nickelodeon theaters that offered longer, larger moving pictures. On July 12, 1912, he premiered the first feature-length film, 'Les amours de la reine Élisabeth', featuring French actress Sarah Bernhardt. From exhibition, Zukor moved into production, and eventually consolidated several smaller companies into what we know today as Paramount Pictures Corporation. In 1914, he produced the first American-made feature film, 'The Prisoner of Zenda', and that was followed by such successes as 'The Count of Monte Cristo', 'Tess of the D'Urbervilles', The Sheik and 'La caravana de Oregón'. He was also credited with personally bringing to the screen some of the industry's great stars.

Before passing away, Adolph Zukor worked on 3 movies that average a 7.4/10 score.