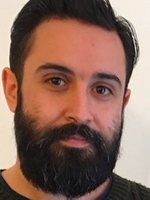 Basque filmmaker from San Sebasián. He studied Image at the Cinema and Video School of Andoain. He has directed some shortfilms, but the most famous were 'Cólera' and 'Portal Mortal'. His first film was 'Ventajas de viajar en tren', a movie starred by Pilar Castro and Luis Tosar.

Aritz Moreno has been active for 2 years, participating in 1 movies that average a 4.5/10 score.