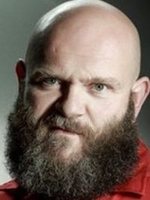 Serbian actor known for his role as Helsinki in 'The Paper House'. Before that, Peric also appeared in the series 'Crematorio' and 'Mar de Plastico'. Although his dream has always been to be an actor, the wars in his country forced him to postpone his dream for a while. He was educated in theatrical performance in Berlin, until he came to Spain and began in the audiovisual content.

Darko Peric has been active for 2 years, participating in 1 movies that average a 5.7/10 score.