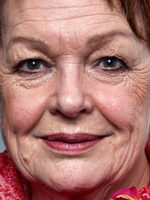 Ghita Nørby (born 11 January 1935 in Copenhagen) is a popular Danish actress with 117 film credits to her name from 1956?2005, making her one of the most active Danish actresses ever. She was born in Copenhagen, Denmark to opera singer Einar Nørby (1896?1983). She studied two years at the Danish Royal Theatre (Det Kongelige Teater), and was an actress there from 1956?1959. She has been married a number of times. First in 1956 to architect Mogens Garth-Grüner, and then to actor Henrik Wiehe. She met her next husband, Italian pop singer/actor Dario Campeotto, on the set of a film they were shooting in 1962. They were married in 1963, and had a son, actor Giacomo Campeotto, in 1964. They were divorced in 1969. She married actor Jørgen Reenberg in April 1970. She is currently married to pianist/composer, Svend Skipper. She has received a number of awards and recognitions including the Ingenio et Arti medal in 2006.[1] At the 27th Guldbagge Awards she was nominated for the award for Best Actress for her role in Freud's Leaving Home.

Ghita Nørby has been active for 7 years, participating in 1 movies that average a 6.8/10 score.