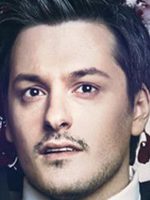 Ilya Naishuller is a inusual director with a diffrent type of shooting. It's known primarily for his work as music director, he decided to put fully into the world of cinema with his debut 'Hardcore' in what is a futuristic action thriller in person. With her previous video 'Bad Motherfucker' became a viral phenomenon on YouTube with over 20 million visits. using the same method in the first person through the mask GoPro cameras.

Ilya Naishuller has been active for 5 years, participating in 5 movies that average a 6.6/10 score.