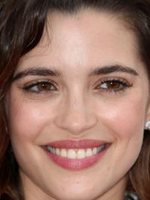 She began in the world of television as a fixed actress in the series 'Dancin 'Days' and 'Paixão', in addition to 'Madre Paula' which is still in broadcast. Her leap to the big screen is given thanks to the character of Angelica in 'The man who killed Don Quixote', the cursed movie by Terry Gilliam and finally released in 2018.

Joana Ribeiro has been active for 3 years, participating in 3 movies that average a 6.8/10 score.

The Man Who Killed Don Quixote