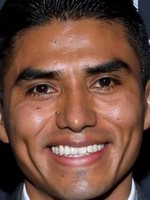 Jorge Antonio Guerrero Martínez, better know as Jorge Antonio Guerrero, is a Mexican film, televison and theatre actor known for his role as Cadete Tello in the tv series 'Luis Miguel'. Guerrero debuted on the big screen in Alfonso Cuarón's 'Roma', film nominated to 10 Oscars, including the category of Best Picture. In 'Roma', Guerrero plays on of the many villains, Fermín.

Jorge Antonio Guerrero has been active for 3 years, participating in 1 movies that average a 9.3/10 score.