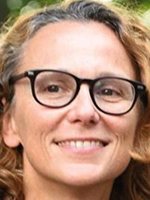 She is a film director, screenwriter, actress and producer from Argentina. After dedicating herself to several short films, she presented her first film 'Sisters' at the Toronto Festival in 2005, receiving great praise for critical art. She graduated from the Master of Film at the University of Columbia, in New York, where she has also been a professor of Cinematographic Direction since 2009. In the same way, she has worked in the world of television with a series of documentaries and a film.

Julia Solomonoff has been active for 4 years, participating in 1 movies that average a 7.3/10 score.