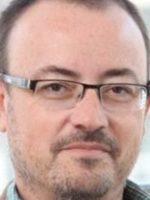 Spanish film director known for directing and writing films such as 'La flaqueza del bolchevique', 'La mitad de Óscar', 'Cannibal' or 'The author'. Born in El Ejido (Almeria) and graduated in Information Sciences in the Complutense University of Madrid, Martin Cuenca began working in the world of cinema as an assistant director collaborating with prominent filmmakers like José Luis Cuerda, Icíar Bollaín and José Luis Borau at the end of the 80s. In 1999, he began to dedicate himself to writing his own films, also working during these years as a professor of direction and interpretation in various film schools.

Manuel Martín Cuenca has been active for 19 years, participating in 5 movies that average a 6.1/10 score.

The Weakness of the Bolshevik