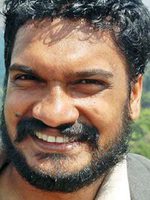 Sanal Kumar Sasidharan was born in the village of Perumkadavila, district of Thiruvananthapuram, Kerala. He graduated in zoology and law and began to practice as a lawyer. In 2001, he formed a partnership with his friends to make independent films funded through crowdfunding. Thanks to this, she has directed three short films and a feature film 'Sexy Durga', which won the Tiger Award at the Rotterdam Festival.

Sanal Kumar Sasidharan has been active for 4 years, participating in 1 movies that average a 0.0/10 score.