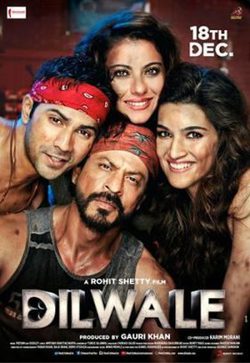 Directed by one of the great Indian director, Rohit Shetty, this production can be seen on December 18. From Bollywood and produced by Gauri Khan and director Shetty own company under the Red Chillies Entertainment and Rohit Shetty Productions respectively. The film starring Shah Rukh Khan, Varun Dhawan and Kriti Sanon as main roles. In January 2015, the filmmaker Shetty announced the project with actor Shah Rukh Khan in the lead role. Shetty said the film would begin shooting in March 2015. After Shetty chose actress and singer Kajol to star in the film with Khan. After Shetty Varu Dhawan chose the actor, who plays the brother of Khan, actress Kriti Sanon is also involved in the film. A film full of action, romance and comedy.

?
Write your own 'Dilwale' review.