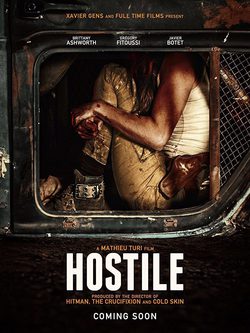 Juliette is the sole survivor of the apocalypse with nothing but her memories to keep her company. Day in and day out she lives the same lonely existence until one day she crashes her car in the middle of the desert and is forced to spend the night trapped in her car. Despite a hellish night, the experience becomes somewhat of a wakeup call for Juliette who discovers she's not the only inhabitant left on the planet. During the night, Juliette is visited by what only can be described as feral, human looking creatures. When the morning rolls around, on top of her hunger and thirst, Juliette has to deal with a broken leg, that will only slow her down on her journey back to her base. 'Hostile' is told through two different narratives, one that takes place in the post-apocalyptic present and one before the beginning of the end.

?
Write your own 'Hostile' review.