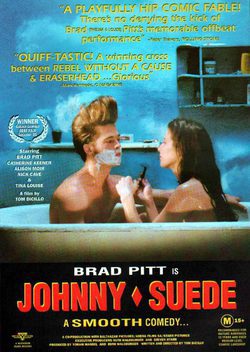 Johnny Suede is a young man with an attitude and an immense pompadour, who wants to be a rock n' roll star like his idol Ricky Nelson. He has all the stylistic accouterments?except a pair of black suede shoes. One night, after leaving a nightclub a pair of black suede shoes falls at his feet. Soon afterwards, Johnny meets Darlette. In spite of Darlette's abusive boyfriend with a gun, Johnny begins to see Darlette everyday. When Johnny is forced to pawn his guitar for rent money, Darlette mysteriously leaves him. Depressed about Darlette's desertion, he wanders aimlessly, and he meets Yvonne, a woman much wiser than Johnny who teaches him that there are things in life much more important than a pair of black suede shoes.