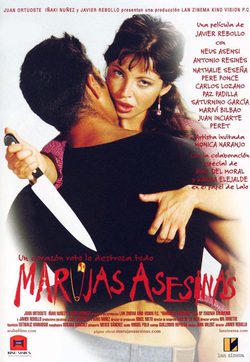 Javier Rebollo directs 'Killer Housewives' and co-writes with María Eugenia Salaverri this criminal comedy. The film focuses on Azucena, a woman with serious mental problems. Considered as a witch, she is tired of her husband Felipe and wants to get rid of him. In love with her lover, Pablo, in a sickly way, she decides to plan the way to be able to literally get rid of his husband and become a widow and be free for her lover. In order to carry out her plan, she recruits her sister Isabel, her cousin Quique, an overly sensitive butcher, and Lalo, a reporter. Although her plan proves to be a real disaster, Azucena will discover a perfect way to get rid of people who are in her way. In this way, she will begin to take addiction to the crime and will become a real killer. The main cast is formed by Neus Asensi, Antonio Resines, Nathalie Seseña, among others.

?
Write your own 'Killer Housewives' review.