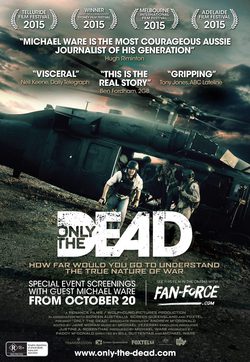 The documentary 'Only the Dead' follows in the footsteps of an Australian journalist who decides to travel to the Middle East after 9/11. The invasion of Iraq has ended and the Americans are celebrating victory, Baghdad is full of eager international press dying to find out about Saddam Hussein's fallen stories, tales that speak of liberation and of a new era. There are parties, dinners at restaurants and although coalition forces are under attack, it is always in a relatively close place that feels far away. All the while however Abu Musab al-Zarqawi, a leader of Al Qaeda, plan a real civil war plagued by televised executions that will transformed the invasion into one of the most brutal conflicts. When the terrorist decides to make his figure public, he also choose to record a video that gives to Michael Ware, the Australian journalist who in consequence embarks on an impossible journey in search of answers. Ware himself and Bill Guttentag write and direct this film.

'Only The Dead' trailer

Reviews Only The Dead

?
Write your own 'Only The Dead' review.