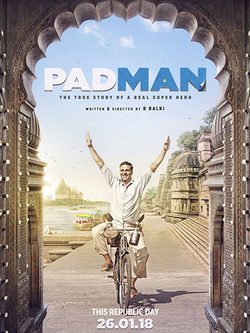 'Padman' follows India's Menstrual Man, Arunachalam Muruganantham in a story, based on true events, to help remove the stigma surrounding periods in India. Muruganantham aimed to use a machine of his own creation to mass produce sanitary towels in order to make them available to women and girls living in some of the poorest and most rural parts of India. Muruganantha?s invention allowed him to create sanitary towels at a much cheaper price than commercial machines. Despite the somewhat unconventional central theme of the film, actor Akshay Kumar, who plays Arunachalam Muruganantham is adamant that 'Padman' is a family film. The real life activist chose to make a film as opposed to a documentary because he felt the former had an influencing factor that documentaries do not. At the core of the film is Muruganantham's wish to remove the stigma surrounding periods in India. Hide full plot... Show full plot

?
Write your own 'Padman' review.