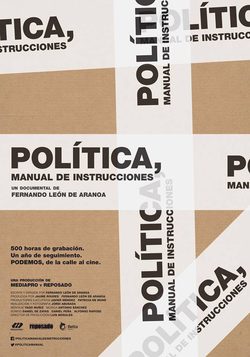 'Politics, instruction manual' is a story from within the building process we, the political party led by Pablo Iglesias. A practical manual on how developed and released this political project in just one year since its founding. The documentary tracks the leader Iglesias and his team, and their encounters with different political and social leaders throughout Spain and the rest of the world. The final cut comes from a careful selection from among the more than 500 hours of footage that can show the path until arrival at the congress. Directed and written by Spanish filmmaker Fernando Leon de Aranoa, the documentary is produced by Mediapro and Reposado Producciones and distributed by Betta Pictures. Premiered in theaters in Spain on 3 June 2016.