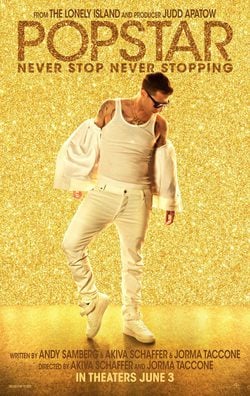 Conner4Real is a famous and popular rapper who goes through a hard time in his life after the release of his latest album is a failure. This is why he decides to try anything to relaunch his career, all except reunite with his old rap group The Style Boyz. Akiva Schaffer ('The Watch') and Jorma Taccone ('MacGruber') directed this comedy and co-write the screenplay with Andy Samberg ('Brooklyn Nine-Nine') who is the star of the film. Imogen Poots ('That Awkward moment'), Bill Hader ('Trainwreck'), Joan Cusack ('The End of the Tour'), Martin Sheen ('The Amazing Spider-Man 2') and Will Forte ('Nebraska') are part of the cast. The film has the cooperation of famous singer like Adam Levine, Pink or Usher.