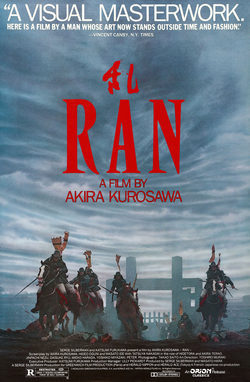 'Ran' is a 1985's Japanese film directeb by the great filmmaker that was Akira Kurosawa. This film is considered as a new cinematographic adaptation of William Shakespeare's 'King Lear'. It is also based on old Japanese legends about the great lords. Set in the 16th Century in Japan, after a lot of years being in charge, one the greatest warlords of the region, Lord Hidetora, announces his retirement and his intention to divide his land equally so his three sons can heir it. While the two older sons, Taro and Jiro, accept their father's wishes, the younger of them all, Saburo, disagrees as he believe that it would be bad for their land and their bond as a family. This decision will unleash a fight between the brothers to control the land.

?
Write your own 'Ran' review.