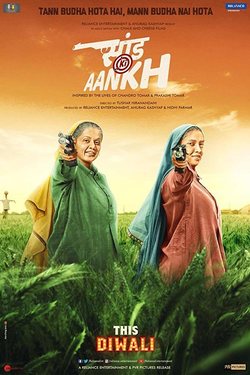 A biographical drama about two women, Chandro and Prakashi Tomar, who became the world's oldest sharpshooters in their 60s. The story of these two women sets in 1990. This year, Chandro and her sister in law, Prakashi, start to practice target shooting. Cuando both realize they can work as sharpshooters, these two old women decide to participate in national championships. Their extraordinary skill given them the victory and a funny nickname, "Shooter Dadi" (Shooter grandmother). 'Saand Ki Aankh' is based in a real story. This biopic is the first movie of Tushar Hiranandani. This filmmaker has written indian films such as 'A Flying Jatt', 'Half Girlfriend' and 'Ek Villain'. The script is signed by Balwinder Singh Janjua ('Firangi', Mubarakan', 'Chak Jawana'). The film is starred by Taapsee Pannu ('Pink', 'Baby', 'Naan Shabana') and Bhumi Pednekar ('Toilet - Ek Prem Katha', 'Bhoot: Part One - The Haunted Ship', 'Shubh Mangal Saavdhan') as Prakashi y Chandro. Even though they are in their 30s, the two actresses play these sharpshooters in their 60s thanks to the magic of makeup. The cast of 'Saand Ki Aankh' is completed with Prakash Jha ('Jai Gangaajal', 'Raajneeti'), Viinet Kumar ('Mukkabaaz', 'Bard of Blood') and Pawan Chopra ('The Family Man', 'Kalank'). Hide full plot... Show full plot 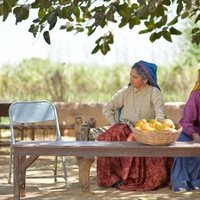 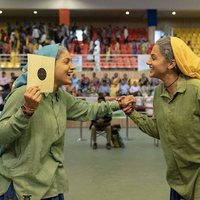 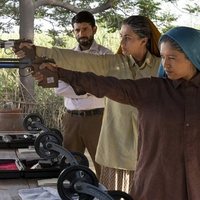 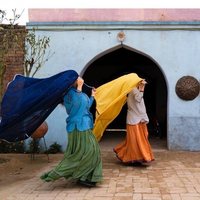 Bhumi Pednekar and Tapsee Pannu had to take shooting classes and learn Haryani to prepare for their roles.