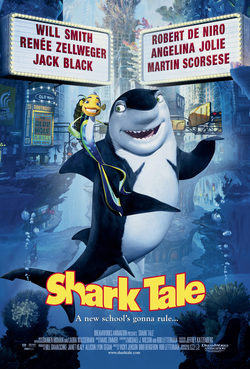 Oceanic wise guys meet up with a small fish who has a big attitude in this computer-animated comedy. Don Lino is the patriarch of a family of sharks who lord over a bustling aquatic community based along a massive underwater reef. Don Lino has two sons, Frankie and Lenny; Frankie is a carnivorous tough guy who takes after his father, but Lenny is, at heart, a kind soul who has earned the ire of his dad by becoming a vegetarian. One of Don Lino's cronies is Sykes , who runs a "whale wash" where Oscar scrubs aquatic mammals for a living. Oscar is a small but ambitious fish who dreams of making something of himself, and when a dropped anchor accidentally kills Frankie, Oscar is suddenly (if mistakenly) celebrated as "the shark killer." Oscar's overnight fame attracts the attentions of Lola, a slinky dragon fish who woos Oscar away from his steady date, Angie; however, Oscar strikes up a friendship with Lenny and has to decide what to do when Don Lino and Sykes decides it's time to "take care" of the "different" shark Hide full plot... Show full plot

?
Write your own 'Shark Tale' review.