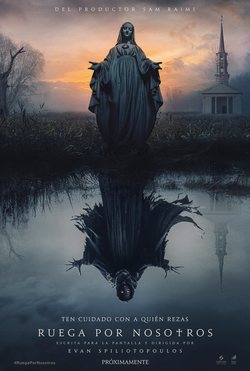 Sam Raimi is producer in 'Shrine', a horror film written and directed by Evan Spiliotopoulos, based on the novel 'Shrine' by James Herbert. Jeffrey Dean Morgan is the star of the story, a journalist whose career isn't what it used to be. He is now a paranormal stuff reporter for the yellow press, but he is the ultimate skeptical. One day he goes to a small town to dig in a mysterious case. A young girl called Alice (Cricket Brown), who can't hear or speak, starts talking under a tree. The neighbors think she can do miracles, and the news has spread fast, filling the town with strangers. The death of the priest starts troubling Fenn, Jeffrey Dean Morgan's character, who will join the town's doctor to find out what is really happening there and why everything seems so dar. Cary Elwes, William Sadler, Katie Aselton, Christine Adams and Diogo Morgado complete the main cast.

?
Write your own 'Shrine' review.