Singin' in the rain 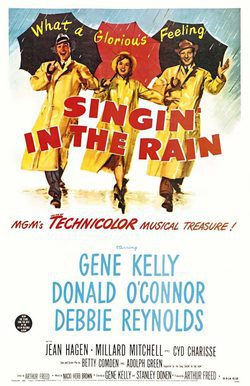 Don Lockwood, a silent film star, has it all: fame, money, success, love ... He is dating another silent film star, Lina Lamont. Both are the fashionable couple in Hollywood. However with the advent of talkies that success will change quickly, producers want to introduce sound in the film that Don and Luna are recording, but this will be a problem because Lina's voice is horrible. That's when he meets Kathy Selden, an aspiring actress who wants all that Don already had. Don quickly falls in love for her, and not only that. In addition he sees in her the possibility of returning to succeed in the world of film thanks to her beautiful voice. Together they propose to do a music ... If Lina permitting.

Cast Singin' in the rain

Reviews Singin' in the rain

?
Write your own 'Singin' in the rain' review.