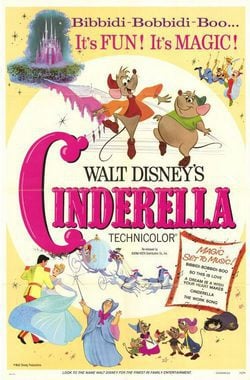 Twelfth feature film by Walt Disney Animation Studios. Based on the version of the popular fairytale by Charles Perrault, it tells the story of a young maiden named Cinderella. Daughter of an honorable Count and motherless, the girl will remain in charge of her wicked stepmother, Lady Tremaine, when the Count, suddenly, dies. Lady Tremaine and her daughters, Drizella and Anastasia, treat Cinderella with contempt, who ends up becoming a servant of her own house. The destination will change for Cinderella when the king organizes a dance so that the crown prince knows a possible candidate to become his wife. All the marriageable women of the kingdom must attend, but Lady Tremaine prevents Cinderella from doing so. Thanks to the help of her Fairy Godmother, who appears as a reward for Cinderella's hard work and efforts, Cinderella will attend the dance, where she will meet the prince and live a tender love story. Winner of the Golden Bear for best musical at the 1st Berlin Film Festival, Special Jury Prize at the 11th Venice Film Festival and nominated for three Oscars. Hide full plot... Show full plot

?
Write your own 'Cinderella' review.