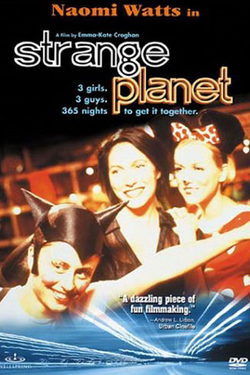 Judy aspires to work in television and gets involved with an older tv executive. Judy's roommate Alice struggles to get over a breakup after two years; Joel is reeling from the collapse of his marriage; Ewan loses faith in being a lawyer and becomes a taxi driver. It's a bit like an elaborate episode of Friends, except that Strange Planet dives into much richer and more complex emotional territory. Comic discussions about biology and love are counterpointed by doubt, loss, and simple confusion--which the sharp writing, directing, and acting manages to make real while maintaining a fluid and dexterous storyline. The conclusion may be too tidy, but you'll feel like these well-drawn characters have earned it.

?
Write your own 'Strange Planet' review.