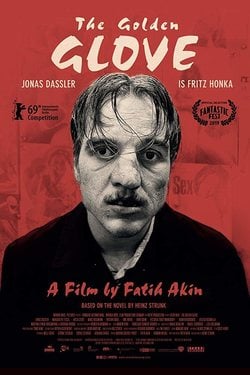 In the sordid district of St. Pauli in Hamburg in the 1970s, nobody suspects that Fritz Honka, a man marginalized by society due to his facial deformity, is a monster, especially in this neighborhood of prostitutes, addicts and heavy drinkers. But Honka hides a dark and deadly secret: he is the serial killer terrorizing the streets of the city. Much like Jack the Ripper, this dangerous criminal attacks women who go around 'The Golden Glove', a pub frequented by the worst of the neighborhood. 'The Golden Glove' is based on the novel of Heinz Strunk 'Der goldene Handschuh', a novel that adapts the real story of the serial killer Fritz Honka, who murdered four women between 1970 and 1975. The movie is written and directed by Faith Akin ('In the Fade', 'Goodbye Berlin', 'Soul Kitchen'). Through extensive make-up and facial prosthesis, Jonas Dassler stars in this story as the infamous and disfigured killer. The cast is completed by Margarete Tiesel ('Walking on Sunshine', 'The Dark', 'Attack of the Lederhosen Zombies '), Hark Bohm ('Und der Zukunft zugewandt', 'Der Liebling des Himmels', 'The Charlemagne Code'), Marc Hosemann ('Magical Mystery oder: die Rückkehr des Karl Schmidt', 'Perfume') and Adam Bousdoukos ('Head-On', 'Smuggling Hendrix', 'Ein Sommer auf Zypern'). Hide full plot... Show full plot ?
Write your own 'The Golden Glove' review.

Based upon the novel of the same title, written by the author Heinz Strunk and published in 2016.