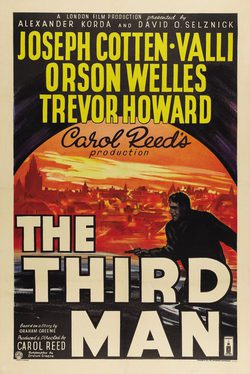 Holly Martins (Josep Cotten) is an alcoholic pulp writer come to visit his old friend Harry Lime (Orson Welles). But when Martins first arrives in Vienna, his friend's funeral is under way. From Lime's girlfriend and an occupying British officer, Martins learns of allegations of Lime's involvement in racketeering, which Martins vows to clear from his friend's reputation. As he is drawn deeper into postwar intrigue, Martins finds layer under layer of deception, which he desperately tries to sort out.

?
Write your own 'The Third Man' review.