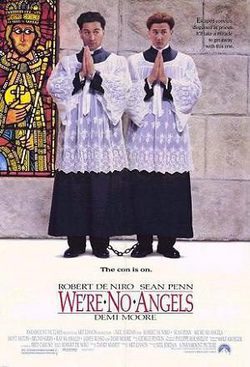 A 1989 comedy film directed by Neil Jordan. It stars Robert De Niro, Sean Penn, and Demi Moore. 'We're No Angels' was Jordan's last film to receive a PG-13 rating by the MPAA, until 'Ondine'. In this film two escaped cons only prayer to escape is to pass themselves off as priests and pass by the police blockade at the border into the safety of Canada. The movie gained mixed reviews. The movie debuted at #8 at the United States box office. It was similarly unsuccessful on home video. Hoyt Axton, Bruno Kirby and ames Russo are also in the film.

?
Write your own 'We're No Angels' review.