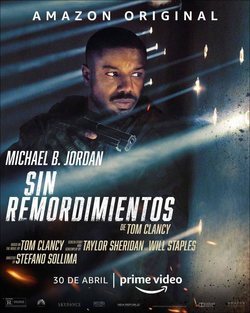 A former Navy SEAL turned CIA operative seeks revenge after his girlfriend is killed by a Baltimore drug lord. 'Without Remorse' is based on the namesake Tom Clancy novel and its script is written by Taylor Sheridan ('Sicario', 'Comancheria'). The book serves as an origin story for John Clark, a recurring character in the Jack Ryan universe. In this story the last name of John is Kelly and tells why he changed his name. Clark has lost his pregnant wife in a car accident, but he will meet Pam, a hitchhiker with who he will have an affair soon. With the passing of time, Clark will find out that Pam is a runaway who became a drug mule and a prostitute. She has just escaped from his pimp. Weeks later, after being in recovery, Clark and Pam drive through a neighborhood where her pimp works. Somebody recognizes Pam and chases them. The movie is directed by Stefano Sollima ('Gomorra', 'Sicario: Day of the Soldado') and starred by Michael B. Jordan ('Just Mercy', 'Creed II'), Jamie Bell ('Rocketman', 'Film Stars Don't Die in Liverpool'), Cam Gigandet ('The Shadow Effect', 'Black Site Delta'), Brett Gelman ('Stranger Things', 'Mr. Mercedes'), Luke Mitchell ('Marvel's Agents of S.H.I.E.L.D.', 'Blindspot') and Jodie Turner-Smith ('Queen & Slim', 'Jett'), among others.