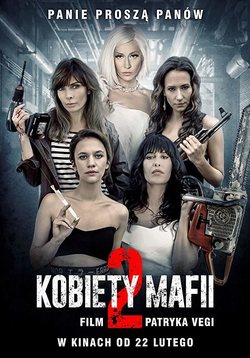 Following the success of the first instalment in this Polish crime-film series, 'Kobiety Mafii' ('Mafia Women'), this violent criminal romp is back with a sequel. After her rise to power and control over the nation's capital in the first film, babysitter turned crime lord Daria (Agnieszka Dygant, 'Prawo Agaty') has deftly organised for a large shipment of cocaine to arrive to Poland from Colombia but a rival organisation hijacks the boat and puts Daria's mission, and her Colombian colleagues, in danger, especially when the ruthless Aida (Angie Cepeda, 'Berko: El Arte de Callar', 'Jane the Virgin') is sent to Poland by the cartel to seek revenge. Meanwhile, the film's comic-relief, Anna (Kasia Warnke, 'Chylka Zaginiecie'), learns the sport of Thai boxing from her cellmate in order to survive the harsh prison system and goes from bottom of the heap to top dog overnight. Over in Morocco, Siekiera (Aleksandra Poplawska, 'Underdog') continues her passionate affair with Amir (Otar Saralidze, 'O mnie sie nie martw'), but ultimately chooses to return to Poland to seek her revenge when he is killed. Veering between gory action and satirical comedy, director Patryk Vega ('Botoks', 'Pitbull') takes the reins once more as director of this sequel. Hide full plot... Show full plot