Claudia Salas and Georgina Amoros reveal that 'Elite' has two WhatsApp groups: "It's been a wonderful family"

Las Encinas really should update its code of conduct what with all the murder, lies, sex and blackmail going on in those shiny corridors. And yet, it's that twisted melodrama that makes 'Elite', the hit Spanish teen drama, so captivating to audiences who just want to be sucked into the world of glamour, wealth and mystery. With the third season set to launch on the 13th March, we sat down with two of last season's new students, Claudia Salas (Rebeca) and Georgina AmorĂłs (Cayetana), who spoke to us about the reaction to their characters, what season three has in store, and why the cast and crew of 'Elite' have not one but two WhatsApp group chats.

One of the most controversial additions to the cast last season was Cayetana, a young working class woman who masquerades as a rich kid to fit in at Las Encinas. A Slytherin if we ever saw one, Georgia AmorĂłs confesses that the reaction to her character was polarising to say the least. "There were people that loved her and there were people that literally hated her", says the actress. This is likely down to the dramatic nature of the show, however, given that, as AmorĂłs points out, viewers have fewer qualms about rooting for much more morally ambiguous characters. "One weird thing that surprised me a lot is how people can feel more hatred for someone for pretending to be something they're not because they have nothing else whereas they love some other characters that are murderers!" AmorĂłs says to Salas's laughter.

Claudia Salas, on the other hand, had a much smoother transition into the fandom, with the vast majority of viewers instantly won over by her character Rebeca's brash attitude and hilarious one-liners. This positive reception was actually quite surprising to the actress herself: "I was actually thinking that people would get pretty tired of the character. She's very loud, very elevated all the time". Will Rebeca have a break from comic quips in favour of a more profound storyline in the third season? Salas hints that this will be the case. "[In the third season] we discover a Rebecca that isn't as superficial as she seemed in the second season", says Salas. "I embark on this journey where she is stripped down, figuratively speaking. We see her vulnerable and broken. We see her rebuilding herself. It's really beautiful". 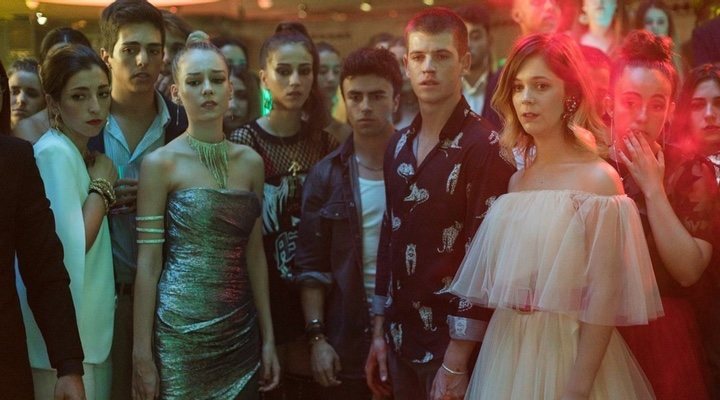 Speaking of character development, both actresses are so content with the characters they portray that even if the opportunity came up, they couldn't imagine themselves playing another role. "It's that I think we're all perfect for the characters that we play", says AmorĂłs. "I like [Rebeca] a lot, for example...But I couldn't have done it the way that Claudia does it. Claudia does an incredible job". Claudia Salas returns her compliment by praising her portrayal of Cayetana. "Look at us sucking up to each other!" she laughs.

The bond between the two actresses is evidently strong and, according to them both, this extends to the entirety of the 'Elite' family, with the female cast members in particular forming a sisterhood of sorts. "We have one [WhatsApp group chat] for everyone and one for just the girls", says AmorĂłs. "It's been a wonderful family. On the last day of shooting, we wrapped up and the five girls went to makeup and we were all just crying and hugging each other". For all of their rivalry on screen, it's clear that the 'Elite' girls have got each other's backs once the cameras stop rolling.

Spin-offs are a tricky beast to get right, especially with a series as beloved as 'Elite', but both Claudia Salas and Georgina AmorĂłs are more than willing to get on board.

"I would love a spin-off about Rebeca," says AmorĂłs. When Claudia Salas suggests that it could take place in the haberdashery/crime den owned by the character's mother, they were off. "We were saying before that she imagines her character opening a real haberdashery", shares AmorĂłs. "Cayetana wants to work in fashion, so I said that they could have a business together".

Whether or not this delightfully whacky spin-off gets the green light, 'Elite' will be returning for an eight episode third season on Netflix on the 13th March.