Who is that girl I see? It's Hua Mulan bursting onto the screen in Disney's latest live-action adaptation in what the first reactions to the film suggest could be the best Disney remake thus far. Although may loyal fans of the 1998 animated take on this Chinese ballad were worried that the remake would bring dishonour on them and their cows due to the significant changes made by Disney and director Niki Caro, such as choosing to cut the beloved dragon Mushu and the film's instantly recognisable musical numbers, the majority of these early reviews, as recorded by Mashable, praise 'Mulan' for being a visually impressive and unabashedly feminist take on the story that honours the 1998 film and the original ballad whilst also standing on its own. 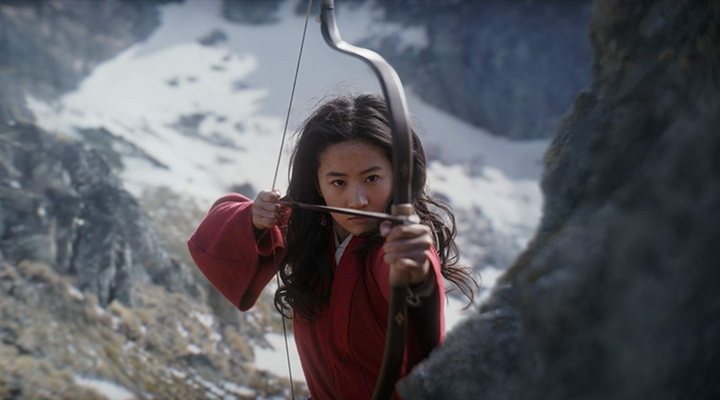 Angie J. Han makes the bold declaration that "'Mulan is the best of the Disney live-action remakes since 'Cinderella'", easing the fanbase's fears about any changes by assuring us that she "didn't even miss the songs", to which there are "subtle nods" throughout the film, according to Kirsten Acuna. Alison Foreman agrees, saying that whatever 'Mulan' leaves behind from the 1998 original, it "offers much more in its absence" and is "full of incredible, action, humor and heart".

#Mulan is the best of the Disney live-action remakes since Cinderella ? I didn't even miss the songs. Finds new notes in a story we already know while delivering gorgeous action, heart, and humor. Liu Yifei is ???

Disney's Mulan remake leaves a lot behind, but offers much more in its absence. Plenty of 1998 throwbacks pepper a story full of incredible action, humor, and heart.

Oh, and the romantic chemistry gets STEAMY. Like chanting "kiss" in a silent theater steamy.#Mulan2020 #mulan pic.twitter.com/soILc7OdTm

#Mulan is absolutely fantastic. Different enough with great action scenes, but with the heart of the original film. It doesn't even matter that it's not a musical. If you're a fan of the animated, there are subtle nods to many of the songs. Can't wait to see this again.

Several of the early reviews also praise the film for its focus on female empowerment at the hands of director Niki Caro and breakout lead, Liu Yifei. "Talk about girl power", one reviewer says, whilst another offers the film a thank you on behalf of "all the female warriors that needed this kick-A movie".

Is #Mulan the first great superhero movie of 2020? It sure feels like it. She soars over rooftops, flies across walls, shoots arrows, and is just a general badass. The film serves as a reminder to be true to yourself. Little girls are going to look up to @yifei_cc pic.twitter.com/cVVFMb07UP

#Mulan is one of the best live-action adaptation of a Disney animated classic. It honors the 1998 film and the ballad by modernizing themes of female empowerment and iconic scenes, while also standing out w/ great cinematography & battle sequences are reminiscent of Wuxia epics. pic.twitter.com/2DUjzX1M1h

Wow. Just wow. Disney's Mulan is not only visually stunning, it is absolutely magical. I laughed, I cried, and I loved every second of it. I cannot wait to take my girls to see it. Talk about girl power. WOW. #Mulan

#Mulan is about a warrior. And that warrior is a legend. Thank you, from all the female warriors that needed this kick-A movie. It's different from the animated version, and I'll be proud to show my daughters this film!

Particular highlights, according to these reactions, are the direction of Niki Caro and performances by Liu Yifei and Yoson An. Liu gives life to the titular Mulan and is praised for her "fantastic performance". Yoson An, on the other hand, plays an iteration of Li Shang, who was split into two characters for this film: Commander Tung, played by Donnie Yen, and Chen Honghui, played by An. Yoson An is praised for bringing romantic chemistry to the film, with the bond between himself and Liu's character allegedly creating surprisingly "steamy" moments.

#Mulan is a gorgeous film that pays homage to the ballad of its origin, and Yifei Liu gives a fantastic performance.
Songs and Mushu are missed, but other adaptation changes serve the story well and fit the tone. (PS. Yoson An is a great not-Shang & the love story still works.) pic.twitter.com/3ICOKKL2jb

Poor reviews are few and far between, although one reaction does criticise the film for "poor villains and inconsistent action quality", though it also acknowledges that there is a "great film yearning to break out" from this live-action adaptation. We're sure that with the other overwhelmingly positive reviews, however, that 'Mulan' can take a bit of criticism. If Hua Mulan can survive the 'I'll Make a Man Out of You' montage, she can survive that.

There's a great film yearning to break out in #Mulan, but it's surprisingly bogged down by adapting the animation. It has its moments, but the poor villains and inconsistent action quality results in a mediocre movie. pic.twitter.com/2iZ3wZYOts

Continuity and Changes in 'Mulan'

This take on the immensely popular Disney classic draws more heavily from the original Chinese ballad in its primary focus on the warrior Mulan instead of the musical numbers and comic relief liberally added to the 1998 animation. The film will follow Mulan (Liu Yifei) as she masquerades as a man to join the Imperial Chinese Army in her father's place to face the imminent invasion by the Hun army led by Bori Khan (Jason Scott Lee).

Joining the cast alongside Liu, Lee and An are Donnie Yen, Jet Li, Gong Li and Tzi Ma. The film is directed by Niki Caro, who was quick to share with us her excitement over the adaptation of this tale as old as time in a recent interview: "This story is more than one thousand years old. The journey of a village girl from soldier to warrior and legend has something to offer for everyone. It doesn't surprise me that it's been told so many times. But I truly believe that there has never been a better time to tell the story of a young, courageous woman".

The tale of this courageous woman in question, the inimitable Hua Mulan, will arrive in UK cinemas on the 27th March.