What team? Wildcats! Although, according to 'High School Musical: The Musical: The Series', a Disney+ original shot in mockumentary style about a group of high-schoolers that attend the school where the original 'High School Musical' was shot putting on their own adaptation of the show whilst also living through dramas, twists and a whole host of musical numbers of their own, they're actually called the East High Leopards. Different big cats, same nostalgic set-up.

Disney+ hits the UK on the 24th March and amongst its impressive catalogue of classics and originals, 'High School Musical: The Musical: The Series' caught the attention of many kids of the 2000s who grew up alongside Zac Efron's Troy Bolton making the surprisingly painstaking decision between basketball and singing only to discover - shockingly - that he can actually do both. Although the series is rife with references to the original trilogy, the plot is somewhat new: Nini (Olivia Rodrigo) is a theatre-loving student who has always dreamed of being a star. After a break-up with her skater boyfriend Ricky (Joshua Bassett), she and new boyfriend, jock and habitual leading man E.J. (Matt Cornett), decide to go up for the roles of Troy and Gabriella, only for Ricky - who auditions in a bid to win back the girl - to be cast as Troy alongside her. Drama and love triangles ensue. In honour of the release of Disney+ UK, here is our spoiler-free review of the first two episodes of 'High School Musical: The Musical: The Series', a show that is cute, nostalgic and has some surprisingly catchy original songs although, much like with an actual low-budget school musical, you're sort of relieved when it finishes. 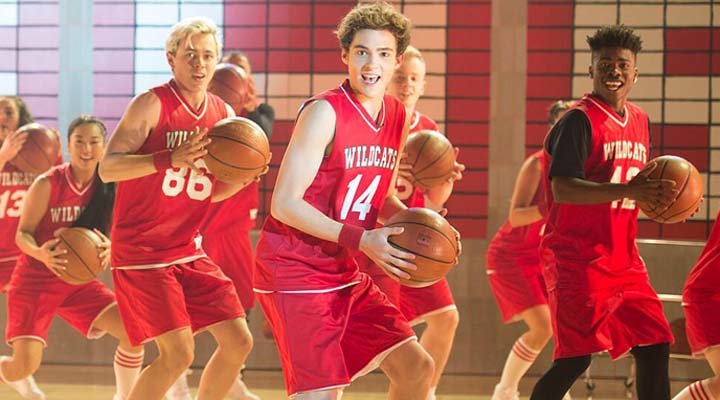 Structurally, the opening two instalments of this ten episode series sets up the action and stakes well, drawing on comfortable and pre-established patterns that we have seen repeated several times across Disney Channel films, rom-coms and movie musicals. Guy gets girl (Ricky and Nini date for a year), guy loses girl (he doesn't say he loves her back and they break up, leading her to start going out with an Abercrombie and Fitch wannabe), guy tries to win girl back (Ricky decides to take an interest in Nini's hobbies: namely, the school musical). All of this happens either before the episode starts or within the first five minutes and so, by the end of episode one, we have our characters and romantic stakes laid out before us. It's predictable and somewhat kitsch but is easy viewing and the sweet, puppy-dog looks that Ricky regularly sends an exasperated Nini will be enough to get many viewers invested in the outcome of their relationship, particularly those within the 10-14 age bracket that this series will likely appeal to.

The mockumentary style is one of the better choices made by creator Tim Federle as it gives many of the characters, especially Sofie Wylie's competitive alpha female Gina, a space to reveal their motivations and endear themselves to the viewer. At times, it feels as though the writers get a bit carried away with the mockumentary material, using the various monologues to pack in poorly written jokes that take up space rather than developing the characters. Joshua Bassett does do an excellent side-eye to the camera expression a la Jim Halpert from 'The Office', however. 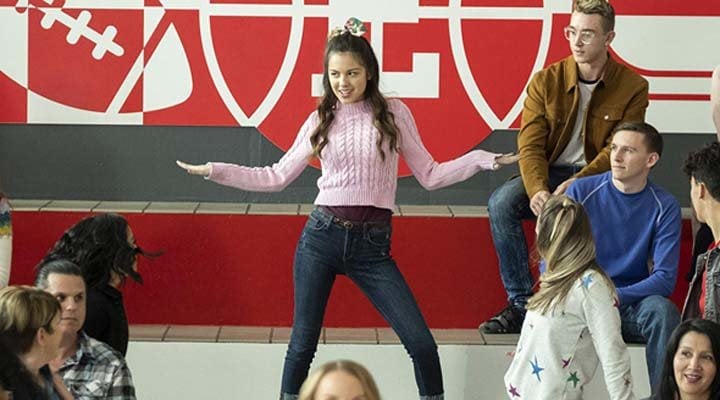 One of the most refreshing aspects of the series, however, that we hope sets the tone for the originals that Disney+ will be producing overall, is that the show is full of diversity without ever veering into tokenism territory. Our main character, Nini, has two mothers and this fact of her life is not explicitly discussed nor preached about by the others. Two women appear on screen and they're her parents, and that's that. No fanfare is made about it. Considering that in the original trilogy, according to Bustle, the studio's views on sexuality led the character of Ryan, played by Lucas Grabeel, to be written into a heterosexual romance despite both director Kenny Ortega and Grabeel interpreting him as gay, the casual inclusivity of 'High School Musical: The Musical: The Series' feels like a satisfying and just full circle moment. Considering the emphasis placed on Nini's romantic relationships in the first two episodes, it's also wonderful to see the stress placed on feminism throughout. Dara Renée is excellent as Nini's best friend, Kourtney, who is delightfully Team Nini instead of Team E.J. or Ricky, and despite being E.J.'s cousin, the character of Ashlyn (Julia Lester) pulls him up on his possessiveness, stating that just because he's with Nini, it doesn't mean he owns her. The days of sticking to the status quo with regards to gender are over in this series and the girls are calling out casual sexism as they see it.

As to be expected, the show is jam-packed with renditions and allusions to the songs from the original trilogy (we'd list them all here, but instead we dare you to getcha head in the game and remember a few). One of the most unexpected and welcome surprises of the first two episodes, however, is how catchy the original songs written and composed for the series are. Teens and adults alike are sure to find themselves humming along to "I Think I Kinda, You Know" and will watch with their jaws on the floor as Olivia Rodrigo and Julia Lester bring the house down with the power ballad "Wondering". The composers bopped to the top with these tracks, and then some.

Still Not Breaking Free From Clichés

Despite the evident desire of the creators, directors and writers to infuse the series with freshness and diversity, many of the characters remain exhausted clichés that make it difficult for you to root for them. Whilst Olivia Rodrigo and Sofie Wylie are the two strongest performers of the cast (and are also, ironically, the youngest), both actresses deserved more room to push their characters to higher levels. Rodrigo's Nini, especially, deserved to graduate beyond the girl-next-door guise she maintains throughout the first two episodes. Nini's new boyfriend, E.J., is almost comically badly written with his jealousy and complete arrogance, though this is more likely down to the writing, which has him drawling "babe" at her every two seconds and ranting about his own talent, than Matt Cornett's performance. Larry Saperstein and Dara Reneé's characters were shoehorned into the goofy best friend and sassy confidante archetypes when both actors have natural enough chemistry and delivery to have started something new (pun intended). 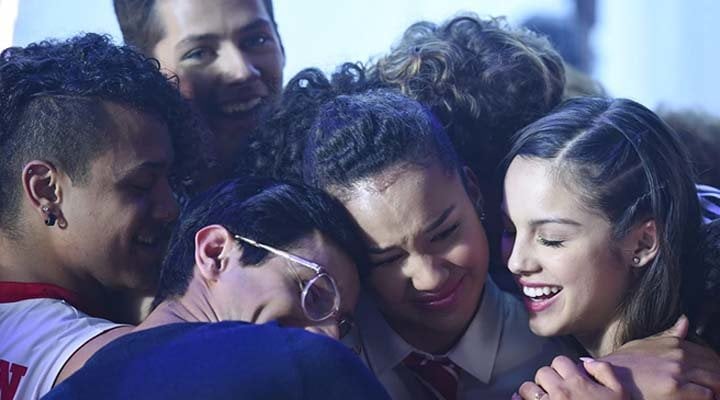 Perhaps in an attempt to disguise this bad writing and characterisation with flashy lights and glitter, every scene is hugely overacted and stunted. From the new drama teacher Miss Jenn (Kate Reinders) singing a vaguely operatic a cappella version of "We're All in This Together" to the near-hysteria of the drama students every time some minor inconvenience crops up, at times the series seems more like a stage show than a show made for television. Everything is big and shiny: big smiles, huge eyes, over-exaggerated gestures. It's exhausting to watch, and that's before they even start the dance rehearsals.

In short, 'High School Musical: The Musical: The Series' will likely appeal to a young teen audience who are in need of a more updated, socially aware version of the story than the one that the 2006 'High School Musical' offered. The songs promise to become Disney original staples and some of the young performers wow with their impressive wrangling of the frankly lacklustre material. And yet, we couldn't help but feel a little bit relieved when the curtains closed.

The Best: Diversity how it should be done. Some genuinely good musical numbers.